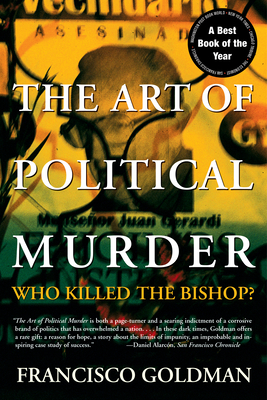 The Art of Political Murder

Who Killed the Bishop?

Francisco Goldman's widely-acclaimed retelling of the Bishop Gerardi murder case, now reissued with a new epilogue marking the release of George Clooney's production of the HBO documentary film based on Goldman's account.

Known in Guatemala as The Crime of the Century, the Bishop Gerardi murder case, with its unexpectedly outlandish scenarios and sensational developments, confounded observers and generated extraordinary controversy. When it was first published, The Art of Political Murder exposed a cover-up of the crime and helped change Guatemala's destiny as it emerged from decades of civil war. In the years since, major players in the case have been imprisoned, including the president of Guatemala, and one of the key suspects was murdered while in prison, along with thirteen others. Now reissued with a new epilogue to account for these recent events and their far-reaching repercussions, this is an unmissable new edition of this extremely important book. (Salman Rushdie).

FRANCISCO GOLDMAN is the author of three novels: The Long Night of White Chickens, which won the Sue Kaufman Prize for First Fiction and was a finalist for the PEN/Faulkner Award; The Ordinary Seaman, a finalist for the International IMPAC Dublin Literary Award and The Los Angeles Times Book Prize; and The Divine Husband. Goldman is also the author of the non-fiction book, The Art of Political Murder: Who killed the Bishop?, which was named a Best Book of the Year by The Chicago Tribune, The Washington Post, The San Francisco Chronicle, and The Economist. Goldman has been a contributing editor for Harper's magazine, and his fiction, journalism and essays have appeared in publications such as The New Yorker, The New York Review of Books, Esquire, and The New York Times Magazine. He is the recipient of a Guggenheim Foundation grant and the T. R. Fyvel Freedom of Expression Book Award, and was a fellow at the American Academy of Berlin and the Center for Scholars and Writers at the New York Public Library. He currently directs the Premio Aura Estrada/Aura Estrada Prize. Goldman divides his time between Brooklyn and Mexico City.
Loading...
or support indie stores by buying on