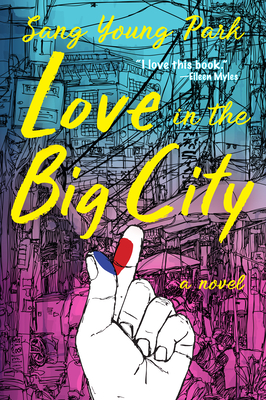 Love in the Big City

“I’ve never read a book with a voice like Sang Young Park brings to this novel — young, queer, Korean — unafraid to tackle important issues while remaining funny, edgy, and approachable. I can’t wait to read whatever he writes next.”
— Adam Possehl, Powell's Books, Portland, OR
View the List

A funny, transporting, surprising, and poignant novel that was one of the highest-selling debuts of recent years in Korea, Love in the Big City tells the story of a young gay man searching for happiness in the lonely city of Seoul

Love in the Big City is the English-language debut of Sang Young Park, one of Korea's most exciting young writers. A runaway bestseller, the novel hit the top five lists of all the major bookstores, went into twenty-six printings, and was praised for its unique literary voice and perspective. It is now poised to capture a worldwide readership.

Young is a cynical yet fun-loving Korean student who pinballs from home to class to the beds of recent Tinder matches. He and Jaehee, his female best friend and roommate, frequent nearby bars where they push away their anxieties about their love lives, families, and money with rounds of soju and ice-cold Marlboro Reds that they keep in their freezer. Yet over time, even Jaehee leaves Young to settle down, leaving him alone to care for his ailing mother and to find companionship in his relationships with a series of men, including one whose handsomeness is matched by his coldness, and another who might end up being the great love of his life.

A brilliantly written novel that takes us
into the glittering nighttime of Seoul and
the bleary-eyed morning after with both
humor and emotion, Love in the Big City
is a wry portrait of millennial loneliness as
well as the abundant joys of queer life.

SANG YOUNG PARK was born in 1988 and studied French literature at Sungkyunkwan University. He worked as a magazine editor, copywriter, and consultant before debuting as a novelist. The title story of his bestselling short story collection, The Tears of an Unknown Artist, or Zaytun Pasta, was one of Words Without Borders's most read pieces ever. He lives in Seoul. ANTON HUR was born in Stockholm, Sweden. He is the winner of a PEN Translates grant and a PEN/Heim Translation Fund grant, among many others, and his translations include Kyung-Sook Shin's The Court Dancer and Kang Kyeong-ae's The Underground Village.
Loading...
or support indie stores by buying on