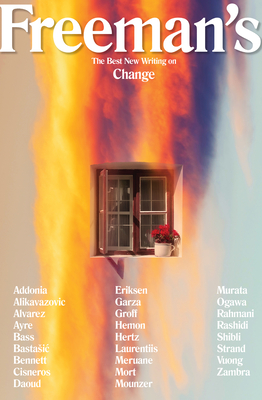 The Covid-19 pandemic forced many of us to reimagine our homes, work, relationships, and adapt to a new way of life-one with far fewer possibilities for interaction. And yet, in this period of intense isolation, we've faced dilemmas which are nearly universal. How to love, to care for aging parents, to find a home, attend to a planet in flux, fight for justice. This vast range of experiences is captured by our greatest storytellers, essayists, and poets, in the new issue of Freeman's: Change.

Some pieces explore the small moments that serve as new routines in a life lived at home, as in Joshua Bennett's essay, where a Coltrane playlist sets the stage for early morning dances with his newborn son as they watch the sun come up. Alejandro Zambra remembers the homes of his past, his dog and cat in New York, his old collection of Chilean literature, homes and possessions he lets go of when he makes a new family in Mexico.

Sometimes, it's the absence of change that drives us to the edge. In Lina Mounzer's "The Gamble," a father's incessant hope for a better life festers and sinks the whole family after they leave Lebanon during the Civil War. In Kamel Daoud's heartbreaking tale, a widow's attempt to retreat into the unchanging past edits her son right from her reality. And in "Final Days," Sayaka Murata imagines a future without aging, where people must choose how and when they want to die, consulting guidebooks like Let's Die Naturally Super Deaths for Adults & The Best Spots.

John Freeman was the editor of Granta until 2013. His books include Dictionary of the Undoing, How to Read a Novelist, Tales of Two Cities, and Tales of Two Americas. He has also published two collections of poetry, Maps and In the Park. He is an Executive Editor at Knopf and teaches at the New School and New York University. His work has appeared in the New Yorker and the Paris Review and has been translated into twenty-two languages.
Loading...
or support indie stores by buying on