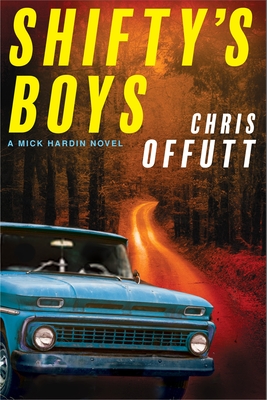 Army CID officer and unofficial PI Mick Hardin is up against unforeseen forces who will stop at nothing in this vividly atmospheric thriller from acclaimed novelist Chris Offutt.
Chris Offutt is a literary master across genres, and his most recent novel THE KILLING HILLS was one of his most successful, earning him a new audience and earning praise from the likes of The New York Times, the Wall Street Journal, and Crime Reads. His latest book, Shifty's Boys, is a compelling, propulsive thriller of murder and mayhem in the hills of eastern Kentucky.
Mick Hardin is home on leave, recovering from an IED attack, when a body is found in the center of town. It's Barney Kissick, the local heroin dealer, and the city police see it as an occupational hazard. But when Barney's mother, Shifty, asks Mick to take a look, it seems there's more to the killing than it seems. Mick should be rehabbing his leg, signing his divorce papers, and getting out of town--and most of all, staying out of the way of his sister Linda's reelection as Sheriff--but he keeps on looking, and suddenly he's getting shot at himself. A dark, pacy crime novel about grief and revenge, and the surprises hidden below the surface, Shifty's Boysis a tour de force that confirms Chris Offutt's Mick Hardin as one of the most appealing new investigators in fiction.

Chris Offutt is the author of the short-story collections Kentucky Straight and Out of the Woods, the novel The Good Brother, and three memoirs: The Same River Twice, No Heroes, and My Father, the Pornographer. His work has appeared in Best American Short Stories and Best American Essays, among many other places. He has written screenplays for Weeds, True Blood, and Treme, and has received fellowships from the Lannan and Guggenheim foundations.
Loading...
or support indie stores by buying on