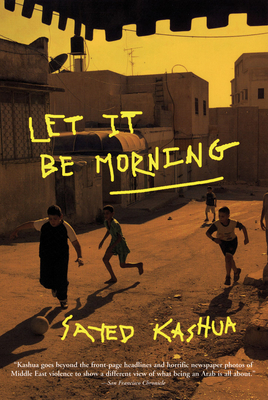 Let It Be Morning

In his debut, Dancing Arabs, Sayed Kashua established himself as one of the most daring voices of the Middle East. In his searing new novel, a young Arab journalist returns to his hometown -- an Arab village within Israel -- where his already vexed sense of belonging is forced to crisis when the village becomes a pawn in the never-ending power struggle that is the Middle East. Hoping to reclaim the simplicity of life among kin, the prodigal son returns home to find that nothing is as he remembers: everything is smaller, the people are petty and provincial. But when Israeli tanks surround the village without warning or explanation, everyone inside is cut off from the outside world. As the situation grows increasingly dire, the village devolves into a Darwinian jungle, where paranoia quickly takes hold and threatens the community's fragile equilibrium. With the enduring moral and literary power of Camus and Orwell, Let It Be Morning offers an intimate, eye-opening portrait of the conflicted allegiances of the Israeli Arabs, proving once again that Sayed Kashua is a fearless, prophetic observer of a political and human quagmire that offers no easy answers.