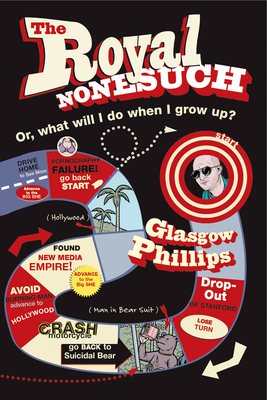 Or, What Will I Do When I Grow Up?

Glasgow Phillips published his debut novel Tuscaloosa at the tender age of twenty-four. The results were disastrous: encouraging reviews, translations, a paperback sale, a film option, and a Stegner Fellowship at Stanford. But over the next two years, as Phillips's second novel unraveled and freelance journalism assignments ended in humiliation, a horrible, secret thought took hold in him: perhaps, just possibly, whatever talent he had was of the kind that would never be more than promise.
Washed up as a "real" writer before he was thirty, Phillips went to Los Angeles and formed a company with his best childhood friend Jason McHugh, independent producer of Cannibal The Musical and Orgazmo. The Royal Nonesuch is the story of Phillips's rollercoaster ride through the twisted world of underground Hollywood and the funhouse of the Internet during the boom. Phillips builds a hilarious and poignant memoir, in the tradition of Augusten Burroughs and Sean Wilsey, from tales of promise and failure, family and madness, friendship and redemption, fame and infamy, and good old-fashioned hustling. It is a remarkable book; a brilliant portrait of a generation in all its foolish glory.