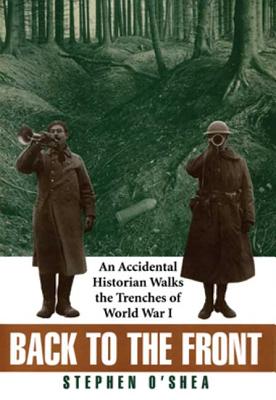 Back to the Front (Hardcover)

An Accidental Historian Walks the Trenches of World War I

World War I is beyond the memory of almost everyone alive today. Yet it has left as deep a scar on the imaginative landscape of our century as it has on the land where it was fought. Nowhere is that more evident than on the Western Front—the sinuous, deadly line of trenches that stretched from the coast of Belgium to the border of France and Switzerland, a narrow swath of land in which so many million lives were lost.

For journalist Stephen O'Shea, the legacy of the Great War is personal (both his grandfathers fought on the front lines) and cultural. Stunned by viewing the "immense wound" still visible on the battlefield of the Somme, and feeling that "history is too important to be left to the professionals," he set out to walk the entire 450 miles through no-man's-land to discover for himself and for his generation the meaning of the war.

Back to the Front is a remarkable combination of vivid history and opinionated travel writing. As his walk progresses, O'Shea recreates the shocking battles of the Western Front, many now legendary—Passchendaele, the Somme, the Argonne, Verdun—and offers an impassioned perspective on the war, the state of the land, and the cultivation of memory. His consummate skill with words and details brings alive the players, famous and faceless, on that horrific stage, and makes us aware of why the Great War, indeed history itself, still matters. An evocative fusion of past and present, Back to the Front will resonate, for all who read it, as few other books on war ever have.

Toronto-born author and journalist Stephen O'Shea moved to France in the early 1980s. There, he took up journalism, shortly after completing postgraduate degrees in politics at the Université de Paris 1 (Pantheon-Sorbonne) and the prestigious Institut d'Etudes Politiques de Paris.

In 1989, Elle magazine relocated O'Shea to New York to be a senior features editor of their American edition. In 1993, he returned to Paris, where he worked as Variety's film critic, and published articles on French culture and politics for American, British, French, and Canadian magazines, including The Observer, The Times of London, Harper's Bazaar, Interview, Allure, and Mother Jones.