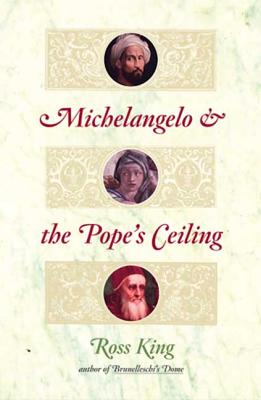 Michelangelo and the Pope's Ceiling

In 1508, despite strong advice to the contrary, the powerful Pope Julius II commissioned Michelangelo Buonarroti to paint the ceiling of the newly restored Sistine Chapel in Rome. Four years earlier, at the age of twenty-nine, Michelangelo had unveiled his masterful statue of David in Florence; however, he had little experience as a painter, even less working in the delicate medium of fresco, and none with the curved surface of vaults, which dominated the chapel's ceiling. The temperamental Michelangelo was himself reluctant, and he stormed away from Rome, risking Julius's wrath, only to be persuaded to eventually begin.
Michelangelo would spend the next four years laboring over the vast ceiling. He executed hundreds of drawings, many of which are masterpieces in their own right. Contrary to legend, he and his assistants worked standing rather than on their backs, and after his years on the scaffold, Michelangelo suffered a bizarre form of eyestrain that made it impossible for him to read letters unless he held them at arm's length. Nonetheless, he produced one of the greatest masterpieces of all time, about which Giorgio Vasari, in his Lives of the Artists, wrote, "There is no other work to compare with this for excellence, nor could there be."

Ross King's fascinating new book tells the story of those four extraordinary years. Battling against ill health, financial difficulties, domestic problems, inadequate knowledge of the art of fresco, and the pope's impatience, Michelangelo created figures—depicting the Creation, the Fall, and the Flood—so beautiful that, when they were unveiled in 1512, they stunned his onlookers. Modern anatomy has yet to find names for some of the muscles on his nudes, they are painted in such detail. While he worked, Rome teemed around him, its politics and rivalries with other city-states and with France at fever pitch, often intruding on his work. From Michelangelo's experiments with the composition of pigment and plaster to his bitter competition with the famed painter Raphael, who was working on the neighboring Papal Apartments, Ross King presents a magnificent tapestry of day-to-day life on the ingenious Sistine scaffolding and outside in the upheaval of early-sixteenth-century Rome.