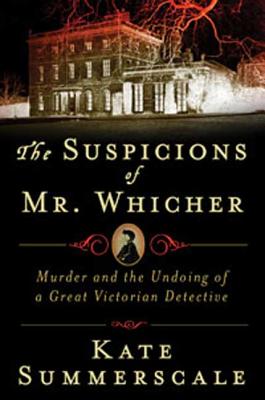 The Suspicions of Mr. Whicher (Hardcover)

A Shocking Murder and the Undoing of a Great Victorian Detective

The dramatic story of the real-life murder that inspired the birth of modern detective fiction.

In June of 1860 three-year-old Saville Kent was found at the bottom of an outdoor privy with his throat slit. The crime horrified all England and led to a national obsession with detection, ironically destroying, in the process, the career of perhaps the greatest detective in the land.

At the time, the detective was a relatively new invention; there were only eight detectives in all of England and rarely were they called out of London, but this crime was so shocking, as Kate Summerscale relates in her scintillating new book, that Scotland Yard sent its best man to investigate, Inspector Jonathan Whicher.

Whicher quickly believed the unbelievable—that someone within the family was responsible for the murder of young Saville Kent. Without sufficient evidence or a confession, though, his case was circumstantial and he returned to London a broken man. Though he would be vindicated five years later, the real legacy of Jonathan Whicher lives on in fiction: the tough, quirky, knowing, and all-seeing detective that we know and love today…from the cryptic Sgt. Cuff in Wilkie Collins's The Moonstone to Dashiell Hammett's Sam Spade.

The Suspicions of Mr. Whicher is a provocative work of nonfiction that reads like a Victorian thriller, and in it Kate Summerscale has fashioned a brilliant, multilayered narrative that is as cleverly constructed as it is beautifully written.

Kate Summerscale is the former literary editor for the Daily Telegraph and author of The Queen of Whale Cay, which won the Somerset Maugham Award and was shortlisted for the Whitbread biography award. Summerscale lives in London.


Praise For The Suspicions of Mr. Whicher: A Shocking Murder and the Undoing of a Great Victorian Detective…

“The Suspicions of Mr. Whicher: A Shocking Murder and the Undoing of a Great Victorian Detective," by Kate Summerscale (Bloomsbury). In crime annals, it's right up there with the Lindbergh trial or the mystery surrounding JonBenet Ramsey: In 1860, one of Scotland Yard's finest was sent to solve the murder of a little boy at an upscale address near London. It turned out Jack Whicher's hunch was right, and his footwork fed the public imagination as well as writers such as Charles Dickens. Sadly, failure to clinch the case in court upended Whicher's career.” —Margo Hammond and Ellen Heltzell, Minneapolis Star-Tribune

“Takes you back to a specific place and time with all the imagination and skill of a top-tier historical novelist. You hang on every word, flipping pages faster than you can read them….If you like your murder mysteries wrapped up in a neat little package, this isn't the book for you. But if you're looking for a complex, intellectually stimulating thriller that will leave you breathless, well, this mystery is well worth inspecting.” —Fairfield County Weekly

“[A] fastidious reconstruction and expansive analysis of the Road Hill murder case…Summerscale smartly uses an energetic narrative voice and a suspenseful pace, among other novelistic devices, to make her factual material read with the urgency of a work of fiction. What she has constructed, specifically, is a traditional country-house mystery, more brutal than cozy, but presenting the same kind of intellectual puzzle as her fictional models and adorned, as such books once were, with wonderfully old-fashioned maps, diagrams, engravings, courtroom sketches and other illustrations…More important, Summerscale accomplishes what modern genre authors hardly bother to do anymore, which is to use a murder investigation as a portal to a wider world. When put in historical context, every aspect of this case tells us something about mid-Victorian society…The author's startling final twist both vindicates her fallen hero and advances an ‘aggressive' attack on moral hypocrisy in his day and ours.” —Marilyn Stasio, New York Times Book Review

“Reads like a modern crime novel, filled with intriguing tidbits about the beginnings of criminal detection and the modern mystery crime novel.” —K. Sue Collins, The Tampa Tribune

“A terrific book...opens up a dark door in the Victorian credenza--dense with detail, and yet with a nimbleness to the writing that's unusual even for a very good detective story.” —Nicholson Baker

“Kate Summerscale's THE SUSPICIONS OF MR. WHICHER (Walker; 360 pages) is not just a dark, vicious true-crime story; it is the story of the birth of forensic science, founded on the new and disturbing idea that innocent, insignificant domestic details can reveal unspeakable horrors to those who know how to read them.” —Lev Grossman, Time

“One eloquent doozy of a true-crime thriller.” —Entertainment Weekly, Grade A-

“If you are a mystery lover, or if you have ever wondered how the modern love of the genre began, you'll enjoy Summerscale's tracing of the early days of the profession and the fascination it exerted...a fascinating look at Victorian life, death and detection” —Mary Foster, Associated Press

“Summerscale's clean writing makes The Suspicions of Mr. Whicher so dynamic that she can't be accused of "freezing" the past--instead, she has done a masterly job of reviving it, with all its curiosities and contradictions. But, most strikingly, she has created an enthralling mystery by overlaying the fictional tools of misdirection and suspense onto a nonfiction narrative that, in its day, helped inspire writers to create a new fictional genre--a strange and very impressive feat.” —Britt Peterson, The American Scholar

“told and interwoven with admirable skill and definition.” —Bookpage

“A mesmerizing portrait of one of England's first detectives and the gruesome murder investigation that nearly destroyed him….Whicher is a fascinating hero, and readers will delight in following every lurid twist and turn in his investigation.” —Publishers Weekly, Starred Review

“Summerscale organizes the book like a period novel, with a denouement that suggests that full justice was never done. Erik Larson (The Devil in the White City ) fans will be enthralled.” —Library Journal

“Summerscale has produced not only a dazzling non-fiction thriller, but also an acute work of literary and social history.” —The Daily Express

“Kate Summerscale's book is a tour de force. It sweeps us irresistibly into the investigation, turning us into armchair detectives… Under the spell of [her] scrupulous intelligence and mesmerizing research, we are drawn into a detective story within a detective story that takes us halfway into the 20th century and across the sea to Tasmania before the clues finally add up to what surely must be the last word on the Road Hill Murder.” —The Daily Mail

“Summerscale has constructed nothing less than a masterpiece… The Suspicions of Mr Whicher is at one and the same time a crime thriller, a sociological history, a biography and a fascinating essay on the nature of investigation… My shelves are stacked with books about crime, but none more satisfying than this.” —Craig Brown, The Mail on Sunday

“Summerscale has done excellent research in ferreting out the details of this curious case. [She] has come up with a new solution to the puzzle and in doing so has produced a book that deepens and expands the knowledge of what one would have thought was an already over-examined case: a remarkable achievement.” —The Sunday Times