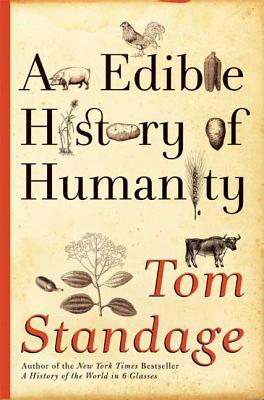 An Edible History of Humanity

Throughout history, food has done more than simply provide sustenance. It has acted as a tool of social transformation, political organization, geopolitical competition, industrial development, military conflict and economic expansion. "An Edible History of Humanity" is an account of how food has helped to shape and transform societies around the world, from the emergence of farming in China by 7,500 BCE to today's use of sugar cane and corn to make ethanol.

Food has been a kind of technology, a tool that has changed the course of human progress. It helped to found, structure, and connect together civilizations worldwide, and to build empires and bring about a surge in economic development through industrialization. Food has been employed as a military and ideological weapon. And today, in the culmination of a process that has been going on for thousands of years, the foods we choose in the supermarket connect us to global debates about trade, development and the adoption of new technologies.

Drawing from many fields including genetics, archaeology, anthropology, ethno-botany and economics, the story of these food-driven transformations is a fully satisfying account of the whole of human history.


Praise For An Edible History of Humanity…

“Earliest civilizations appeared on earth when farmers banded together and exploited their excess crops as a means of trade and currency. This allowed some people to abandon agriculture [leading to] organized communities and cities. Standage traces this ever-evolving story through Europe, Asia, and the Americas and casts human progress as an elaboration and refinement of this foundation…Standage also uncovers the aspects of food distribution that underlay such historic events as the Napoleonic Wars and the fall of the Soviet empire.”—Booklist

“[Standage] shows how one of humanity’s most vital needs (hunger) didn't simply reflect but served as the driving force behind transformative and key events in history. … Perhaps the most interesting section is the final one, which looks at the ways in which modern agricultural needs have acted as a spur for technological advancement, with Standage providing a summary of the challenges still faced by the green revolution.”—Library Journal

“This meaty little volume… ‘concentrates specifically on the intersections between food history and world history.’ But history isn’t Standage’s only concern. He takes the long view to illuminate and contextualize such contemporary issues as genetically modified foods, the complex relationship between food and poverty, the local food movement, the politicization of food and the environmental outcomes of modern methods of agriculture… Cogent, informative and insightful.”—Kirkus Reviews

Tom Standage is business editor at The Economist magazine and the author of four works of history, including A History of the World in 6 Glasses and The Victorian Internet. He has also written for the Guardian, the New York Times, Wired, and other publications. Standage holds a degree in engineering and computer science from Oxford University, and is the least musical member of a musical family. He is married and has two children.
Loading...
or
Not Currently Available for Direct Purchase