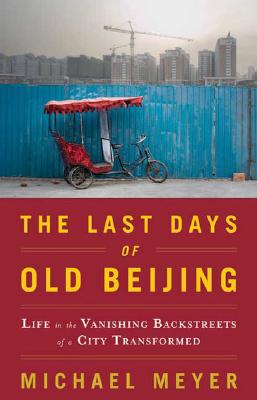 Life in the Vanishing Backstreets of a City Transformed

A fascinating, intimate portrait of Beijing through the lens of its oldest neighborhood, facing destruction as the city, and China, relentlessly modernizes.

Soon we will be able to say about old Beijing that what emperors, warlords, Japanese invaders, and Communist planners couldn't eradicate, the market economy has. Nobody has been more aware of this than Michael Meyer. A long-time resident, Meyer has, for the past two years, lived as no other Westerner--in a shared courtyard home in Beijing's oldest neighborhood, Dazhalan, on one of its famed "hutong" (lanes). There he volunteers to teach English at the local grade school and immerses himself in the community, recording with affection the life stories of the Widow, who shares his courtyard; coteacher Miss Zhu and student Little Liu; and the migrants Recycler Wang and Soldier Liu; among the many others who, despite great differences in age and profession, make up the fabric of this unique neighborhood.

Their bond is rapidly being torn, however, by forced evictions as century-old houses and ways of life are increasingly destroyed to make way for shopping malls, the capital's first Wal-Mart, high-rise buildings, and widened streets for cars replacing bicycles. Beijing has gone through this cycle many times, as Meyer reveals, but never with the kind of dislocation and overturning of its storied culture now occurring as the city prepares to host the 2008 Summer Olympics. Weaving historical vignettes of Beijing and China over a thousand years through his narrative, Meyer captures the city's deep past as he illuminates its present. With the kind of insight only someone on the inside can provide, "The Last Days of Old Beijing" brings this moment and the ebb and flow of daily lives on the other side of the planet into shining focus.

Michael Meyer first went to China in 1995 with the Peace Corps. A longtime teacher, and a Lowell Thomas Award winner for travel writing, Meyer has published stories in "Time," "Smithsonian," the "New York Times Book Review," the" Financial Times," " Reader's Digest," ""the" Los Angeles Times," and the" Chicago Tribune." In China, he has represented the National Geographic Society's Center for Sustainable Destinations, training China's UNESCO World Heritage site managers in preservation practices. "The Last Days of Old Beijing" is his first book.

Praise For The Last Days of Old Beijing: Life in the Vanishing Backstreets of a City Transformed…

“Michael Meyer’s voracious curiosity has led him deep, deep into a vanishing world that other visitors and foreign correspondents almost all see only from a taxi window. He comes at it with a wide knowledge of history, a thirst for people’s life stories, a novelist’s ability to evoke a social universe, and an Arctic explorer’s willingness to live through a sub-zero winter with little heat and the nearest communal toilet far down a snowy lane. This is a stunning, compassionate feat of reportage which will long endure.”—Adam Hochschild, author of King Leopold’s Ghost and Bury the Chains

“It’s rare that a writer truly lives a book, commits himself to the rhythms of a place, and turns research into something deeper. For the past two years, Michael Meyer has lived and taught in the hutong neighborhoods of Beijing; nobody writing in English knows this world as well as he does.”—Peter Hessler, author of Oracle Bones and River Town

“Nimbly told...Through his skillful weaving of his professional experiences with his intimate encounters with neighbors, The Last Days of Old Beijing is as much a chronicle of the physical transformation of the city as it is a tribute to the inhabitants of his beloved hutong.”—Julie Foster, San Francisco Chronicle

“Meyer is a graceful writer in full command of his voice, with a scrupulous eye for detail and a flawless sense of comic timing...There is a plainspoken eloquence to his account and a winning determination to subject himself to the same scrutiny he brings to bear on his neighbors and sources...An emissary from a nation that routinely junks its own past and starts anew, Meyer finds himself a champion of an unpopular cause.”—Holly Brubach, T: The New York Times Style Magazine

“This August, as we watch athletes gasping for breath in 'Bird's Nest' stadium beneath a gaudy international skyline, Meyer's message will sound especially plangent. All in all, his record of the dying ways of a city is an impressive feat. And while the phenomenon may be most extreme there, it's not just Beijing's problem. In a way, we're all living on New Ancient Culture Street.”— Kate Sekules, New York Times Book Review

“A charming memoir and a compelling work of narrative nonfiction about the city itself…Mr. Meyer writes sympathetically of his school, his fellow teachers and his eager pupils, who struggle with a system that rewards rote learning over comprehension. He punctuates his daily-life chronicle with historical vignettes, reaching back to China's imperial days but also capturing the transformations of postwar Beijing.”—Ian Johnson, Wall Street Journal

“Michael Meyer's impressive new book, The Last Days of Old Beijing: Life in the Vanishing Backstreets of a City Transformed goes a long way toward illuminating some of the scenes that have come to symbolize early-21st-century China, at least before the unrest in Tibet and the Sichuan earthquake…These images eloquently capture the sense of eras colliding, which is a core part of many China stories—including Meyer's own….Meyer remains acutely sensitive to Beijing's many, often contradictory changes: it has more architectural showpieces but harsher divides between rich and poor; a greater sense of its global importance but a shrinking memory of its history; rapid development but a vanishing sense of the security that comes from looking out for one's neighbors. But his greatest strength is in depicting how such changes affect, for better and worse, the widow next door and the other memorable characters who populate this evocative tale.—Jeffrey Wasserstrom, Newsweek International

“A mixture of romanticism and Chinese pragmatism and an attractive...profile of a city in ceaseless change...The Last Days of Old Beijing will give you a good introduction to Beijing just in time for the Summer Games.”—Tish Wells, Chicago Tribune

"[Michael Meyer] writes vividly about both the spartan and sensuous sides of hutong living, with the pleasures outweighing the privations."—Robert Cremins, Houston Chronicle