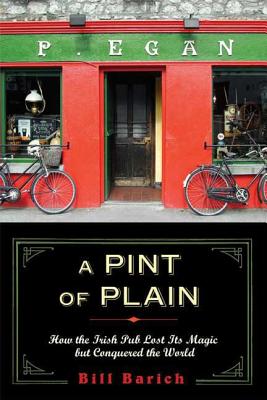 A Pint of Plain

Tradition, Change, and the Fate of the Irish Pub

Seamlessly blending history and reportage, Bill Barich offers a heartfelt homage to the traditional Irish pub, and to the central piece of Irish culture disappearing along with it.
After meeting an I rishwoman in London and moving to Dublin, Bill Barich a "blow-in," or stranger, in Irish parlance found himself looking for a traditional I rish pub to be his local. There are nearly twelve thousand pubs in Ireland, so he appeared to have plenty of choices. He wanted a pub like the one in John Ford's classic movie, "The Quiet Man," offering talk and drink with no distractions, but such pubs are now scare as publicans increasingly rely on flat-screen televisions, rock music, even Texas Hold 'Em to attract a dwindling clientele. For Barich, this signaled that something deeper was at play an erosion of the essence of Ireland, perhaps without the Irish even being aware.

"A Pint of Plain "is Barich's witty, deeply observant portrait of an Ireland vanishing before our eyes. Drawing on the wit and wisdom of Flann O'Brien (the title comes from one of his poems), James Joyce, Brendan Behan, and J. M. Synge, Barich explores how I rish culture has become a commodity for exports for such firms as the I rish Pub Company, which has built some five hundred "authentic" Irish pubs in forty-five countries, where "authenticity is in the eye of the beholder." The tale of Arthur Guinness and the famous brewery he founded in the mid-eighteenth century reveals the astonishing fact that more stout is sold in Nigeria than in Ireland itself. While 85 percent of the I rish still stop by a pub at least once a month, strict drunk-driving laws have helped to kill business in rural areas. Even traditional I rish music, whose rich roots "connect the past to the present and close a circle," is much less prominent in pub life. I ronically, while I rish pubs in the countryside are closing at the alarming rate of one per day, plastic I PC-type pubs are being born in foreign countries at the exact same rate.

From the famed watering holes of Dublin to tiny village pubs, Barich introduces a colorful array of characters, and, ever pursuing "craic," the ineffable Irish word for a good time, engages in an unvarnished yet affectionate discussion about what it means to be Irish today.


Praise For A Pint of Plain: Tradition, Change, and the Fate of the Irish Pub…

“With scholarly rigor, he surveys the literature on the history of drinking, drunkenness and pubs before rewarding himself with the grueling and perilous fieldwork of sampling deeply from the 12,000 outposts in Ireland where alcohol is sold by the glass…Mr. Barich's picaresque meander through the Irish bloodstream is an entertaining survey of the culture and commerce of Ireland at a tremulous moment in its history…Fascinating.”

“Barich weaves a never-ending stream of oddly engaging historical and literary references into every dead end…Barich’s passion for boozy subjects is broad and undeniable. He’s equally at ease covering the effects of the temperance movement and introducing regional slang terms for being drunk.”

“The American writer Bill Barich moved to Ranelagh, on Dublin's south side, some time ago and set out to find the perfect Irish pub. A Pint of Plain: Tradition, Change, and the Fate of the Irish Pub is an engaging account of his quest and investigations.”

“Nicely researched, intelligently written, his book is a fun read tinged with melancholy at the thought of time passing and things changing; appropriately Irish, I think.”

Bill Barich has written for the New Yorker and other publications for many years. He is the author of the classic Laughing in the Hills, as well as Crazy for Rivers, Carson Valley, and most recently A Fine Place to Daydream: Racehorses, Romance, and the Irish. He lives in Dublin, Ireland.
Loading...
or
Not Currently Available for Direct Purchase