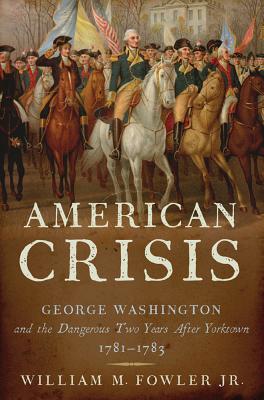 George Washington and the Dangerous Two Years After Yorktown, 1781-1783

Most people believe the American Revolution ended in October, 1781, after the battle of Yorktown; in fact the war continued for two more traumatic years. During that time, the Revolution came closer to being lost than at any time in the previous half dozen. The British still held New York, Savannah, Wilmington, and Charleston; the Royal Navy controlled the seas; the states--despite having signed the Articles of Confederation earlier that year--retained their individual sovereignty and, largely bankrupt themselves, refused to send any money in the new nation's interest; members of Congress were in constant disagreement; and the Continental army was on the verge of mutiny.
William Fowler's An American Crisis chronicles these tumultuous and dramatic two years, from Yorktown until the British left New York in November 1783. At their heart was the remarkable speech Gen. George Washington gave to his troops evcamped north of New York in Newburgh, quelling a brewing rebellion that could have overturned the nascent government.

William M. Fowler, Jr. is a distinguished professor of History at Northeastern University in Boston. Prior to that, for eight years he was director of the Massachusetts Historical Society. He is the author of Empires at War: The French and Indian War and the Struggle for North America, Jack Tars and Commodores: The American Navy, 1783-1815, Beacon Hill: A Biography of John Hancock, and Samuel Adams: Radical Puritan. He lives in Reading, Massachusetts.

Praise For American Crisis: George Washington and the Dangerous Two Years After Yorktown, 1781-1783…

“'Huzzah!’ for William Fowler. His superb American Crisis brings to life, with great clarity and understanding, one of the least-known, most important chapters in the long struggle for independence, and leaves no doubt of how much, once again, was owed to George Washington for how things turned out.”—David McCullough, author of John Adams, 1776, and The Greater Journey “Bill Fowler is the author of many important works of American history, but with American Crisis he has written the book of his long and distinguished career.  Chronicling one of the least known portions of the American Revolution—the two years between Yorktown and the actual end of the war—he has created a page-turner full of intrigue, drama, and countless unexpected twists.  You will never think of George Washington in quite the same way after reading American Crisis.”—Nathaniel Philbrick, author of In the Heart of the Sea and Mayflower    “The Revolutionary War did not end with the Allied victory at Yorktown. Two uncertain and perilous years elapsed before the peace treaty that ended the war finally took effect. At last, there is a book that examines these critical war years in detail. William Fowler’s magnificent American Crisis treats General Washington’s preparations for more war, the woeful American economy, peace negotiations, and the politics of the Continental army. In rich detail and graceful prose, Fowler fleshes out an often forgotten part of the War of Independence, a time that shaped and prepared Washington for the political battles on his horizon.”—John Ferling, author of Independence: The Struggle to Set America Free and several books on George Washington