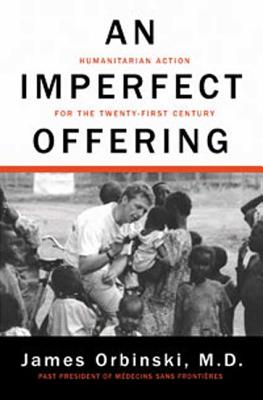 Humanitarian Action for the Twenty-First Century

From one of the world's greatest humanitarian activists comes a searing personal memoir that is also an urgent call to confront suffering in all its many forms.

Having seen things we hope never to see, confronted suffering and dispassion and evil we hope never to encounter, and faced deep personal torment, James Orbinski still believes in "the good we can be if we so choose." His chosen medium for revealing this is stories from his own experience—a doctor's indelible testimony from the front lines in Peru, Somalia, Afghanistan, Rwanda, Zaire—embodied in which are warnings, hope, and lessons in how we can inject humanitarian activity into our lives. Being political, he has discovered, is not only reserved for politicians; admitting imperfection is essential to compassion. With an eye for detail like that of the finest journalist and the empathy of the most committed doctor, Orbinski's powerful voice is matched by the urgency of his message. At a time of great political and moral uncertainty, An Imperfect Offering is invaluable reading for anyone who wants to make a difference.

"This book is a series of stories in which I ask, again and again, ‘how to be in relation to the suffering of others.' It is a personal narrative about the political journey I have taken over the last twenty years as a humanitarian doctor, as a citizen, and as a man. It is about the mutuality that can exist between us, if we so choose. I have come to see humanitarianism not as separate from politics, but in relation to it, and as a challenge to political choices that too often kill or allow others to be killed. At its best, politics is an imperfect human project. It is at its worst when we delude ourselves into thinking it can be perfect. Speaking is the first political act. It is the first act of liberty, and it always implicitly involves another. In speaking, one inherently recognizes that "I am and I am not alone." In this space lies our humanity." (a composite from chapter 1)

James Orbinski is past international president of Medecins Sans Frontieres/Doctors Without Borders, and accepted the Nobel Peace Prize for MSF in 1999. Prior to joining MSF, he was a medical researcher in Rwanda in the late 1980s, and a family doctor in small town Canada. With MSF, he worked in Peru, in Somalia during its famine and civil war, in Afghanistan during its civil war, in Rwanda through the genocide and in Zaire during the slaughter that followed. In 1999, he helped launch MSF's Access to Essential Medicines Campaign, and he has spoken on behalf of MSF before the United Nations Security Council, the leaders of the World Health Organization, the United Nations High Commission for Relief, the World Bank, and at the White House and before government ministers and heads of state the world over. When his term as president of MSF ended in 2001, he worked as chair of MSF's Neglected Diseases Working Group. In 2004, he left MSF to found Dignitas International, an organization committed to community-based care for people living with HIV/AIDS in the developing world. He lives in Canada.