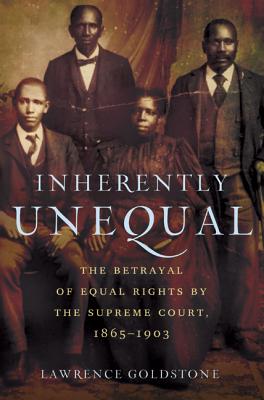 A potent and original examination of how the Supreme Court subverted justice and empowered the Jim Crow era.

In the following years following the Civil War, the 13th Amendment abolished slavery; the 14th conferred citizenship and equal protection under the law to white and black; and the 15th gave black American males the right to vote. In 1875, the most comprehensive civil rights legislation in the nation's history granted all Americans "the full and equal enjoyment" of public accomodations. Just eight years later, the Supreme Court, by an 8-1 vote, overturned the Civil Rights Act as unconstitutional and, in the process, disemboweled the equal protection provisions of the 14th Amendment. Using court records and accounts of the period, Lawrence Goldstone chronicles how "by the dawn of the 20th century the U.S. had become the nation of Jim Crow laws, quasi-slavery, and precisely the same two-tiered system of justice that had existed in the slave era."

The very human story of how and why this happened make Inherently Unequal as important as it is provocative. Examining both celebrated decisions like Plessy v. Ferguson and those often overlooked, Goldstone demonstrates how the Supreme Court turned a blind eye to the obvious reality of racism, defending instead the business establishment and status quo--thereby legalizing the brutal prejudice that came to definite the Jim Crow era.


Praise For Inherently Unequal: The Betrayal of Equal Rights by the Supreme Court, 1865-1903…

“Goldstone offers a clear, cogent reading of the court's machinations, no small accomplishment since the justices generally rested their opinions on convoluted legal reasoning rather than on broad principles.” – The Washington Post

“An absorbing account of the Supreme Court’s role following the Civil War.”—Library Journal

“A furious indictment of the Supreme Court as an accessory to the anti-democratic machinations of Gilded Age elites.”—Kirkus Reviews

“One of the saddest episodes in American history has been inadequately explored and poorly understood—until now. Lawrence Goldstone’s brilliantly written book, Inherently Unequal, traces the post-Reconstruction Supreme Court’s slow strangulation of equal rights for African-Americans. It will be a shock to many that the judicial branch, viewed in the modern context as the premier defender of civil rights, was primarily responsible for the nation’s descent into a deep, racist inequality that ruined the lives of millions for a century. As Goldstone shows us, Lincoln’s great legacy was cynically dismantled by the officeholders best positioned to protect it.”—Larry Sabato

“As with Dark Bargain, Lawrence Goldstone once again adds a much-needed chapter to U.S. history with Inherently Unequal.”—Tavis Smiley

Lawrence Goldstone is the author of Dark Bargain: Slavery, Profits, and the Struggle for the Constitution, and The Activist: John Marshall, Marbury v. Madison, and the Myth of Judicial Review. He lives in Westport, Connecticut.