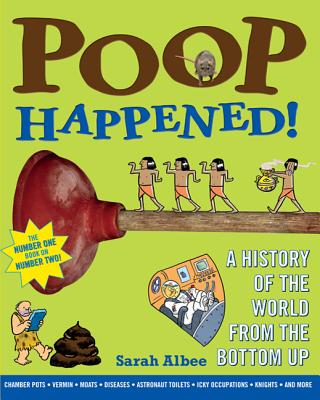 A History of the World from the Bottom Up

Did lead pipes
cause the fall of the Roman Empire?
How many toilets were in the
average Egyptian pyramid?

How did a knight wearing fifty
pounds of armor go to the bathroom?
Was poor hygiene the last straw
before the French Revolution?
Did Thomas Crapper really invent
the modern toilet?
How do astronauts go
in space?
History finally comes out of the water-closet in
this exploration of how people's need to relieve themselves shaped human
development from ancient times to the present. Throughout time, the most
successful civilizations were the ones who realized that everyone poops, and they
had better figure out how to get rid of it! From the world's first flushing toilet
invented by ancient Minoan plumbers to castle moats in the middle ages that
used more than just water to repel enemies, Sarah Albee traces human
civilization using one revolting yet fascinating theme.

A blend of historical photos and humorous illustrations
bring the answers to these questions and more to life, plus extra-gross sidebar information adds to the potty humor. This is bathroom reading kids, teachers,
librarians, and parents won't be able to put down!

Sarah Albee has worked on over a hundred books for the pre-school market, three of which have been New York Times bestsellers. She has worked as a newspaper cartoonist, and as an editor for Children's Television Workshop. She lives in Connecticut with her husband and three children.

Robert Leighton is the illustrator of What's Going on Down There, and is also a puzzle-writer and cartoonist for The New Yorker. He lives in New York City.