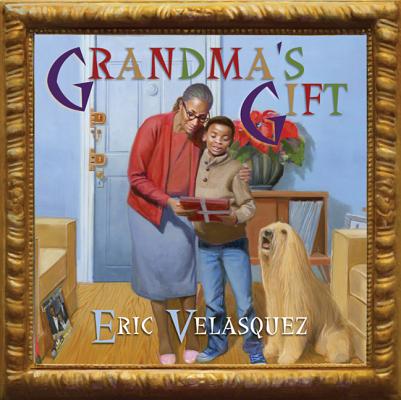 This prequel to Eric Velasquez's biographical picture book
"Grandma's Records" is the story of a Christmas
holiday that young Eric spends with his grandmother. After they prepare
their traditional Puerto Rican celebration, Eric and Grandma visit the
Metropolitan Museum of Art for a school project, where he sees a
painting by Diego Velasquez and realizes for the first time that he
could be an artist when he grows up. Grandma witnesses his fascination,
and presents Eric with the perfect Christmas gift-a sketchbook and
colored pencils-to use in his first steps toward becoming an artist. A
heartwarming story of self-discovery, "Grandma's Gift"
is a celebration of the special bond between a grandparent and
grandchild.

ERIC VELASQUEZ is the author and illustrator of Grandma'sRecords and the illustrator of The PianoMan, for which he won the Coretta Scott King/John Steptoe NewTalent Award. His most recent collaborations with Carole BostonWeatherford include I, Matthew Henson, whichreceived four starred reviews, and Jesse Owens: Fastest ManAlive, which received two starred reviews. He is a graduateof the School of Visual Arts and lives in NewYork.www.ericvelasquez.com
Loading...
or
Not Currently Available for Direct Purchase