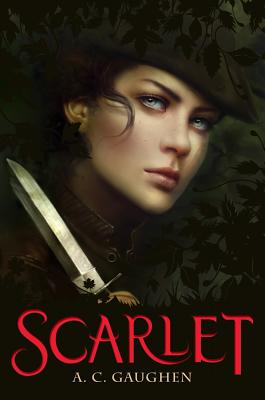 Many readers know the tale of Robin Hood, but they will be swept away by this new version full of action, secrets, and romance, from debut author A. C. Gaughen. Posing as one of Robin Hood's thieves to avoid the wrath of the evil Thief Taker Lord Gisbourne, Scarlet has kept her identity secret from all of Nottinghamshire. Only the Hood and his band know the truth: the agile thief posing as a whip of a boy is actually a fearless young woman with a secret past. When the heat turns on up the band of thieves as the Sheriff of Nottingham seeks revenge, the romance burns strong between Scarlet and her flirtatious fellow outlaws. Helping the people of Nottingham could cost Scarlet her life as Gisbourne closes in. It's only her fierce loyalty to Robin-whose quick smiles and sharp temper have the rare power to unsettle her-that keeps Scarlet going and makes this fight worth dying for.

A. C. Gaughen is a freelance writer and regular blogger who has had several stories published in the Chicken Soup for the Soul series. While attending college in Scotland, which she believes to be the most romantic and naturally beautiful place in the world, AC became enamored of the country's rich history and folklore. She now lives in Massachusetts with her two-year old goldendoodle.
Loading...
or
Not Currently Available for Direct Purchase