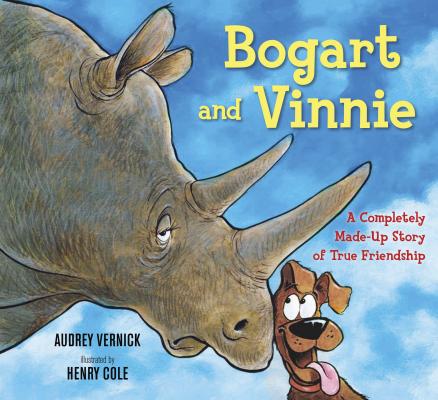 When Vinnie, a crazy-happy dog, gets lost while visiting a nature preserve with his family, he finds comfort in the company of Bogart, a big, lazy rhinoceros. Vinnie "loves "his new friend, but Bogart would rather just take a nap. A friendship soon blossoms-even if Vinnie's definition of "friendship" is very different from Bogart's-and when word of their unique situation spreads, Bogart and Vinnie are a worldwide sensation But as soon as their fifteen seconds of fame ends, what's left is a bond even Bogart can't ignore.

Audrey Vernick is the author of several picture books, including So You Want to Be a Rock Star, Is Your Buffalo Ready for Kindergarten? and Brothers at Bat, which was a New York Times Notable Book and Bulletin of the Center for Children's Books Blue Ribbon Award winner. A two-time recipient of the New Jersey Arts Council's fiction fellowship, Audrey lives near the ocean with her husband, two children, and two crazy-happy dogs. www.audreyvernick.comHENRY COLE has illustrated more than ninety books for children, including Unspoken, which received several starred reviews and is a New York Times Best Illustrated Book of the Year, the popular (and often banned) And Tango Makes Three, and I Know a Wee Piggy, which received two starred reviews. He lives in both Florida and Virginia. www.henrycole.net
Loading...
or
Not Currently Available for Direct Purchase