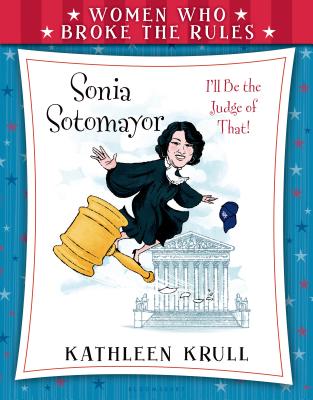 Women Who Broke the Rules (Hardcover)

Many awe-inspiring women have changed the course of history. From fighting for social justice and women's rights to discovering and shaping our amazing country, women have left an indelible mark on our past, present, and future. But it's not easy to affect change, and these women didn't always play by the rules to make a difference! Kathleen Krull blends history and humor in this accessible young biography series.

Sonia Sotomayor's path, from growing up in the projects to success in Ivy League universities to her rise in the legal profession is a true testament to the American dream. She broke the rules women were supposed to follow in her life and career, ultimately becoming the first Latino justice to serve on the U.S. Supreme Court, and the third woman to serve the Court. Her determined spirit and achievements make her a role model and an inspiration.

Kathleen Krull is a prominent biographer for young people. Her Wilma Unlimited was named an ALA Notable Book; her Lives of the Musicians was a Boston Globe/Horn Book Honor Award winner; and her other nonfiction has won countless other awards. Kathleen also wrote A Woman for President: The Story of Victoria Woodhull for Walker & Company. She and her husband, illustrator Paul Brewer, live in San Diego, California.

Praise For Women Who Broke the Rules: Sonia Sotomayor…

“Not the first Sotomayor bio and certainly not the last but perhaps the most fun.” —A Fuse #8 Production