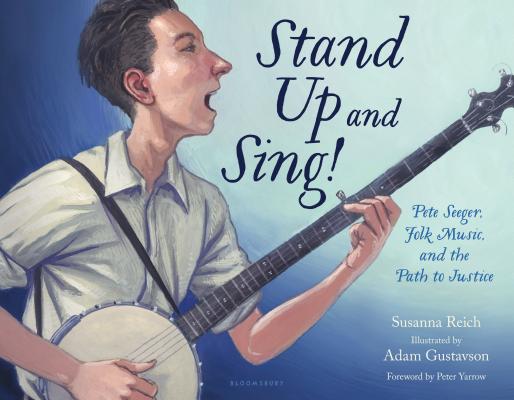 Stand Up and Sing!

Pete Seeger, Folk Music, and the Path to Justice

Inspired by the rhythms of American folk music, this moving account of Pete Seeger's life celebrates his legacy, showing kids of every generation that no cause is too small and no obstacle too large if, together, you stand up and sing!

Pete Seeger was born with music in his bones. Coming of age during the Great Depression, Pete saw poverty and adversity that would forever shape his worldview, but it wasn't until he received his first banjo that he found his way to change the world. It was plucking banjo strings and singing folk songs that showed Pete how music had the incredible power to bring people together.

Using this gift throughout his life, Pete encouraged others to rally behind causes that mattered--fighting for Civil Rights, ending the Vietnam War, or cleaning up the Hudson River. For Pete, no challenge was too great, and what started out as a love for music turned into a lifetime of activism and change. His greatest talent--and greatest passion--would become an unforgettable part of American history.


Praise For Stand Up and Sing!: Pete Seeger, Folk Music, and the Path to Justice…

"The 'We Shall Overcome' songwriter’s legacy spans decades, and this will surely help a new generation understand his fervor and still-relevant message." - Booklist

"[A] feast for the senses." - starred review, SLJ on MINETTE'S FEAST

"A delectable banquet that charts Julia Child's culinary progress through the eyes of her cat, Minette." - starred review, Shelf Awareness on MINETTE'S FEAST