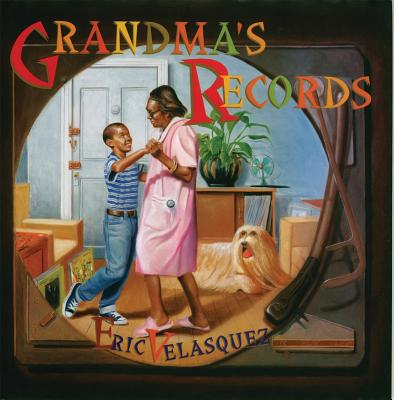 Every summer, Eric goes to live with his grandmother in El Barrio (Spanish Harlem) while his parents work. Through the long hot days, Grandma fills her apartment with the blaring horns and conga drums of Bomba y Plena, salsa, and merengue-the music she grew up with in Puerto Rico-sharing her memories and passions with Eric.

But Eric sees Grandma in a new light when she gets them tickets to hear their favorite band in concert. The music sounds so different than it does at home on their scratchy records. And then the lead singer serenades Grandma right in front of the whole audience!

Join Eric Velasquez on a magical journey through time and across cultures, as a young boy's passion for music and art is forged by a powerful bond between generations.

“Velasquez proves himself adept at evoking time and place as well as a loving family bond. The narrator spends his boyhood summers at his grandmother's apartment in Spanish Harlem, where Grandma introduces him to the sounds of merengue and conga, dances with him and tells stories of growing up in Puerto Rico.” —Publishers Weekly.

“This heartfelt story has a melody all its own.” —Kirkus Reviews

Eric Velasquez won the Coretta Scott King/John Steptoe New Talent Award for his illustrations in The Piano Man. He graduated from the School of Visual Arts and now lives in Hartsdale, New York, with his wife, Deborah.