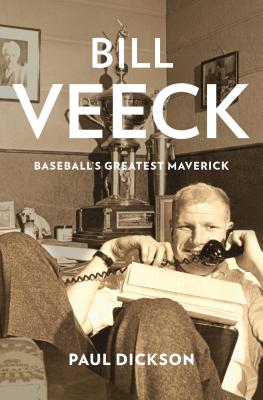 A masterful biography of one of most influential, sharp-witted, and often zany figures in baseball history, whose drive and imagination helped transform the game and the country. As owner of the minor league Milwaukee Brewers, and then the Cleveland Indians, the St. Louis Browns, and the Chicago White Sox-twice-Veeck truly changed the face of baseball.

Praise for Bill Veeck:
"Bill Veeck incorporates the picaresque anecdotes and populist charm of Veeck's memoirs into a narrative marked by Mr. Dickson's broad knowledge and fluid authority. The result is a biography that newcomers to the Veeck legend are likely to find immensely appealing, but one that also makes him new again for those who have already savored the baseball showman's own episodic volumes."-The Wall Street Journal

“Veeck was a one of a kind whose impact reached beyond the ballpark, into the very fiber of 20th-century America. Dickson has captured it all in entertaining fashion.” —James Bailey, Baseball America

“Paul Dickson's excellent biography Bill Veeck: Baseball's Greatest Maverick is among the few great biographies set in sports. Beyond that it is the story of a singular fellow whose energy, determination, wit, and powerful commitment to fairness spiced with an unquenchable sense of the absurd enabled him to live an exceptionally full and passionate life.” —Bill Littlefield, The Boston Globe

“In this crisply written, admiring but never fawning chronicle, Dickson makes a strong case for Veeck as the most influential baseball executive who ever lived. He was certainly the most entertaining.” —Marc Mohan, The Portland Oregonian

“One outstanding question hangs over Paul Dickson's new biography, Bill Veeck, Baseball's Greatest Maverick: Why did it take so long for the most colorful and perhaps most influential figure in baseball history to get a definitive biography? Probably because it took more than 20 years after Veeck's death (in 1986) to put all the facets of his amazing life together. Dickson, author of several superb baseball books, including The Dickson Baseball Dictionary and Baseball is… Defining the National Pastime, has done more than write the best baseball biography so far this decade. He's written an important piece of baseball history.” —Allen Barra, The Chicago Tribune

“In his lively (and occasionally beatific) biography, baseball and cultural historian Paul Dickson brings Veeck to life, relentlessly digging into his career and times to create a portrait of the kind of guy you'd like to have in your corner - or at your table for a drink.” —Chris Foran, Milwaukee Journal-Sentinel

“Bill Veeck: Baseball's Greatest Maverick incorporates the picaresque anecdotes and populist charm of Veeck's memoirs into a narrative marked by Mr. Dickson's broad knowledge and fluid authority. The result is a biography that newcomers to the Veeck legend are likely to find immensely appealing, but one that also makes him new again for those who have already savored the baseball showman's own episodic volumes.” —Maxwell Carter, The Wall Street Journal

“The proof of goodness is usually in the details, so it becomes clear right off the bat that Dickson has written an authoritative work.” —Mike Downey, The Los Angeles Times

“Dickson gives Veeck his due in a volume sure to have a long shelf life.” —Booklist

“An engaging biography of Bill Veeck…[Dickson] expertly evokes Veeck's populist, garrulous public persona, while at the same time showing the private pain he endured as a World War II injury caused him to have countless amputations of portions of his right leg, leading to deterioration and ruin of the rest of his body, but not his spirit. Veeck is not as well remembered as he should be. Dickson's book is a skillful corrective.” —Kirkus

“Paul Dickson has knocked another one out of the park with Bill Veeck: Baseball's Greatest Maverick a skillfully written biography, scrupulously researched, brimming with revealing anecdotes and historical detail ….So if you're planning your summer reading list, I recommend you place Dickson's enlightening and highly entertaining biography on one of baseball's most combative if influential owners at the very top of your list.” —Bill Lucey, The Morning Delivery.

“Dickson brings the larger-than-life presence of Veeck into sharper focus, and re-introduces his innovative baseball mind in a fresh light. It's a smart, detailed and precise read, showing the same delightful candor that Veeck displayed during his heyday.” —Bob D'Angelo, Tampa Tribune

“Any man who wanted to be included on Richard Nixon's enemies list is worthy of a searching biography--and Paul Dickson has been kind ehough to do that for us with his compelling portrait of the unregenerate Bill Veeck.” —Ray Robinson, author of Iron Horse: Lou Gehrig In His Time

“A definitive look at one of baseball's greatest innovators and ambassadors. A must-read.” —Claire Smith, ESPN

“Bill Veeck: Baseball's Greatest Maverick is a deeply insightful, powerful biography of a fascinating figure. It will take its place beside the recent bestselling biographies of Satchel Paige and Mickey Mantle, and will be the baseball book of the season in Spring 2012.” —Feedbooks

“[Veeck] never truly got the recognition he deserved. Now he has.” —Sports Books Reviews by Harvey Frommer

“Dickson is a master with words …He's got a voice that works with this subject, thankfully, and keeps it on track when all craziness could be breaking out. …. In fact, it's about time, and there has to be a way for someone to use this as a launching point for a movie about Veeck's life on the big screen.” —Tom Hoffarth, Los Angeles Daily News

“[S]ure to entertain is Paul Dickson's latest: Bill Veeck: Baseball's Greatest Maverick (Walker). As you'd expect, Veeck's trials, tribulations and experiments with the great game as its greatest promoter may well hold center stage, but Dickson has done something with this biography that I particularly loved … which is to write a book that also covers this man's life outside of the game.” —Christina Kahrl, ESPN, "Sweet Spot"

“BILL VEECK, in the language of the subject, is a homerun--a bases clearer. The story of the remarkable full-life of this pioneering baseball character is told with the steadiness, detail and flare that we have come to expect from Paul Dickson, the premier all-star writer and reporter. The book is great fun--much like being in the bleachers during a day game.” —Jim Lehrer

“Bill Veeck didn't want to break rules, he insisted, just "test their elasticity." He wasn't talking only about baseball. The master showman, who famously sent a three-foot-seven-inch batter to the plate, also desegregated the American League and proudly marched in the funeral procession for Dr. Martin Luther King--on his peg leg and without crutches. Bill Veeck revisits a golden age for baseball, a pivotal time for America and some hilarious moments in the life of a man who helped to change both.” —Clarence Page, Chicago Tribune

“Bill Veeck was inventive, courageous, principled, and hugely influential--the Thomas Paine of a revolutionary time in baseball … [who] has awaited a clear-eyed admiring chronicler, and in Paul Dickson he has found him. This amazingly detailed, delicious biography is, as its subject might have titled it, VEECK--AS IN SPEC-tacular!” —John Thorn, Official Historian, Major League Baseball, and author of Baseball in the Garden of Eden

“[So] don't resist. Buy Paul Dickson's new book and have a blast.” —Larry Tye, author of Satchel: The Life and Times of an American Legend

“Bill Veeck has finally met his match. Paul Dickson, consummate baseball historian, has given Veeck the biography he deserves. Meticulously reported and exhaustively researched, Bill Veeck: Baseball's Greatest Maverick is, like its subject, a show-stopper.” —Jane Leavy, author of The Last Boy: Mickey Mantle and the End of America's Childhood and Sandy Koufax

“Bill Veeck: Baseball's Greatest Maverick is a very fine baseball biography that compares with the best work that has been published on the leaders of the sport over the years. Paul Dickson's breezy style illuminates not only the Bill Veeck of legend, but also the real Bill Veeck who worked hard at his craft even as he honed to a fine art the persona of a maverick and a "hustler," the term Veeck liked best in characterizing himself … Lost in all of the showmanship, publicity and stunts, Dickson concludes, was a tremendously sound baseball and business mind.” —Roger Launius, Washington Independent Review of Books

“I was vastly entertained by Paul Dickson's biography of Bill Veeck, the wild man baseball impresario from Chicago. In addition to being an authoritative chronicle of how the game used to be in that halcyon fifty years between 1930 and 1980, it also gives off a reminiscent aura of grass outfields,the comforting feel of a hard bleacher seat, and airmade redolent of popcorn and tobacco. … One of the strong points of this book is the easy-reading, yet knowledgeable voice of the author.” —Jim Srodes, American Spectator

“Bill Veeck is as good as it gets when it comes to describing an American original. FIVE STARS.” —Budd Bailey, Sports Book Review Center

“The best place to start is to say that I‘ve probably never had as much fun reading a book. Nor have I ever interrupted my reading so many times to regale my family with passages and anecdotes. If you haven't picked this book up yet, the time is now. If you are a baseball fan, a humanitarian, a history buff, someone who enjoys a good story, you'll have a hard time putting it down.” —David Karpinski, Baseball Roundtable

Paul Dickson is the author of several classic baseball books, including The Dickson Baseball Dictionary, The Unwritten Rules of Baseball, The Hidden Language of Baseball, and The Joy of Keeping Score. He is also the author of the seminal narrative history Sputnik: The Shock of the Century and the coauthor of the acclaimed The Bonus Army: An American Epic. He lives in Garrett Park, Maryland.
Loading...
or
Not Currently Available for Direct Purchase