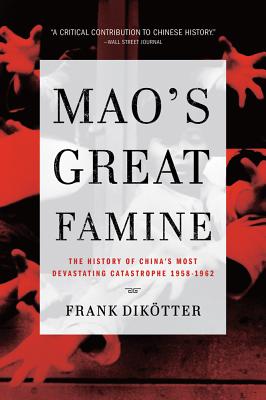 The History of China's Most Devastating Catastrophe, 1958-1962

Winner of the Samuel Johnson Prize

An unprecedented, groundbreaking history of China’s Great Famine that recasts the era of Mao Zedong and the history of the People’s Republic of China.

"Between 1958 and 1962, China descended into hell. Mao Zedong threw his country into a frenzy with the Great Leap Forward, an attempt to catch up to and overtake Britain in less than fifteen years. The experiment ended in the greatest catastrophe the country had ever known, destroying tens of millions of lives."

So opens Frank Dikötter’s riveting, magnificently detailed chronicle of an era in Chinese history much speculated about but never before fully documented, as access to Communist Party archives has long been restricted to all but the most trusted historians. A new archive law has opened up thousands of central and provincial documents that "fundamentally change the way one can study the Maoist era."

Dikötter makes clear, as nobody has before, that far from being the program that would lift the country among the world’s superpowers and prove the power of Communism, as Mao imagined, the Great Leap Forward transformed the country in the other direction. It became the site not only of “one of the most deadly mass killings of human history"--at least forty-five million people were worked, starved, or beaten to death--but also of "the greatest demolition of real estate in human history," as up to one-third of all housing was turned into rubble. The experiment was a catastrophe for the natural world as well, as the land was savaged in the maniacal pursuit of steel and other industrial accomplishments. In a powerful meshing of exhaustive research in Chinese archives and narrative drive, Dikötter, for the first time, links up what happened in the corridors of power--the vicious backstabbing and bullying tactics that took place among party leaders--with the everyday experiences of ordinary people, giving voice to the dead and disenfranchised. His magisterial account recasts the history of the People’s Republic of China.

Frank Dikötter is Chair Professor of Humanities at the University of Hong Kong. Before moving to Asia in 2006, he was Professor of the Modern History of China at the School of Oriental and African Studies, University of London. He has published nine books about the history of China, including Mao's Great Famine, which won the BBC Samuel Johnson Prize for Non-fiction in 2011.
http://www.frankdikotter.com/


Praise For Mao's Great Famine: The History of China's Most Devastating Catastrophe, 1958-1962…

“The most authoritative and comprehensive study of the biggest and most lethal famine in history. A must-read.” —Jung Chang, author of Mao: The Unknown Story

“Mao's Great Famine is a gripping and masterful portrait of the brutal court of Mao, based on new research but also written with great narrative verve, that tells the gripping story of the manmade famine that killed 45 million people, from the dictator and his henchmen down to the villages of rural China.” —Simon Sebag Montefiore, author of Stalin: The Court of the Red Tsar

“Despite Beijing's new openness over the past few decades, there are still whole parts of contemporary Chinese history that Party officials have managed to keep largely hidden from the scrutiny of the outside world. The 1959-60 Great Great Leap Forward, Mao's epic effort of revolutionary will power to force China's peasantry into socialism through the rapid communization of agriculture, is such a period. However, by managing to gain access to unplumbed regional Chinese archives and other new materials, Frank Dikotter has helped throw back the shroud on this period of monumental, man-made catastrophe. With both narrative vigor and scholarly rigor, Mao's Great Famine documents how Mao Zedong's impetuosity was not only the demise of many of his far more politically level-headed comrades-in-arms, but also of tens of millions of ordinary Chinese who perished unnecessarily in this spasm of revolutionary extremism.” —Orville Schell, Author and Director of the Center on US-China relations at the Asia Society

“An intensively researched litany of suffering, packed with statistics, grim anecdotes, and self-serving explanations by leaders responsible for the devastation.” —Publishers Weekly

“Dikotter has done a service to history and, when they are allowed to read it, to the Chinese themselves.” —Bloomberg

“This is an important work illustrating the dangers of one individual holding power to force millions to fulfill his personal fantasies.” —Booklist

“Aided by newly released historical documents detailing the savage infighting and backstabbing of those in power and the extent of the nationwide damage, Dikötter has produced one of the best single-volume resources on the topic.” —Library Journal

“This emphasis on how party violence exacerbated the death toll sets Dikötter's book apart from other studies of the Great Leap Forward … Books like his may help force the atrocities, and the debate, back to the surface.” —Newsweek

“In Mao's Great Famine, historian Frank Dikötter assembles a treasure chest of these historic facts, but more important, he strokes them together into a masterly and memorable story…ranks among the best documentation available on the Great Leap Forward.” —Christian Science Monitor

“Frank Dikötter's thoroughly researched book will help ensure that the country's present-day insecurities do not allow this dark past to be forgotten entirely… His findings are astounding…"Mao's Great Famine" makes for very grim reading in parts. But the sheer volume of previously hidden facts allows a much clearer and more damning picture to emerge, making a critical contribution to Chinese history.” —Wall Street Journal

“A riveting and heartbreaking and illuminating read by an expert in the field…Mao's madness comes through on every page. A MUST READ.” —Travel Watch

“In terrifying detail, Dikotter elucidates the cult-like world of Maoism and the sycophancy of the Chairman’s inner circle…precise details of the Great Leap Forward and the Cultural Revolution wouldn’t emerge until much later—and in the case of Dikotter’s book, which is the most detailed account published in English, a half century later…[a] masterpiece of historical investigation. ” —Commentary

“For those Chinese students who want a reliable and readable account of what really happened, my standard advice has been to read Hungry Ghosts, by the British journalist Jasper Becker.4 But Becker's work has now been largely superseded by the pathbreaking Mao's Great Famine by the social historian Frank Dikötter… This is a first-class piece of research…. [Mao] will be remembered as the ruler who initiated and presided over the worst man-made human catastrophe ever. His place in Chinese history is assured. Dikötter's book will have done much to put him there.” —New York Review of Books