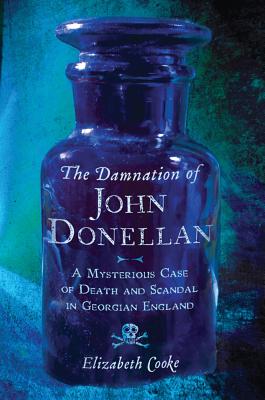 The Damnation of John Donellan

A Mysterious Case of Death and Scandal in Georgian England

On August 30, 1780, in Warwickshire, England, twenty-year-old Theodosius Boughton, the dissolute heir to a vast fortune and baronetcy, died suddenly and in violent convulsions after taking a medication prescribed by his doctor. Was he poisoned by his mother, who insisted that he drink the draught despite its scent of bitter almonds? His brother-in-law, John Donellan, who hurriedly rinsed and broke the bottle containing the medicine after Theodosius's death? His cousin, who desperately wanted the baronetcy? The jealous maid with whom Theodosius frequently cavorted? Many had a score to settle or stood to benefit financially from his demise.

But perhaps he wasn't murdered at all. Could he have died from the quack medicines-including mercury-he used to treat his debilitating syphilis? Or was it a heart attack or stroke, rare in young men but the cause of the deaths of his father and grandfather? Or an epileptic fit? With the cleverness of a master detective and the literary skill of the finest crime writers, Elizabeth Cooke deconstructs the evidence, chronicles the sensational trial that ensued, and provides intriguing new proof that Donellan, who was executed for the murder, may not have been guilty after all. In the process, she opens a fascinating window on the dark and violent underbelly of Georgian society.


Praise For The Damnation of John Donellan: A Mysterious Case of Death and Scandal in Georgian England…

“A meticulous account of a country-house mystery…. Cooke…marshals the story in the brisk style of a whodunit and courtroom drama, with a firm grasp of her primary sources and the wider social history sketched lightly around them. Beyond the details of the death and trial, her main interest is in the dynastic drama of the Boughton family. Larger themes are gestured at in passing. With a gruesome murder mystery at this book's core and titillating glimpses of Georgian high society at its periphery, fans of Kate Summerscale's "The Suspicions of Mr. Whicher" and Amanda Foreman's "Georgiana, Duchess of Devonshire" will be equally well catered for.”—Mike Jay, The Wall Street Journal

Elizabeth Cooke is the author of ten novels. Little White Lies was televised by the BBC, and The Ice Child recounts the story of the doomed Franklin expedition to find the Northwest Passage. She lives in Dorset, England.
Loading...
or
Not Currently Available for Direct Purchase