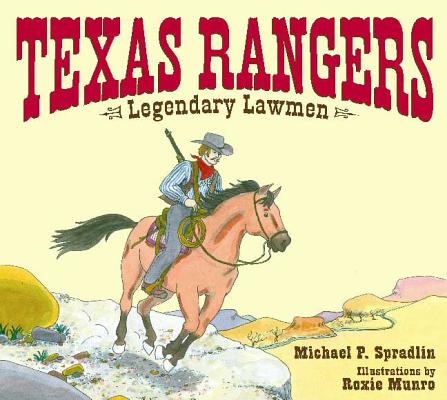 In the 1820s, the Texas frontier was a rugged, lawless place that needed defending. The men that banded together to protect the citizens of Texas from the threats of bandits and raiding native tribes were known as the Texas Rangers. Since bravery was never in short demand, any unmarried man with a good horse and a sharp shot could be selected to join the ranks. As they roamed the Texas frontier maintaining peace and order, the Rangers were present for many of the most famous moments in Texas's exciting history-they defended the Alamo alongside Davy Crockett and Jim Bowie, spied on the Mexican army during the war for independence, and chased down outlaws in the booming oil towns of the Wild West.

The thrilling history of these legendary lawmen is detailed in this fast-paced and richly illustrated account. Readers will be rootin' for the Rangers at every turn and learn a thing or two about keepin' the peace.

MICHAEL P. SPRADLIN is the author of several books for children and teens, including the Spy Goddess series with HarperCollins and the upcoming Daniel Boone's Great Escape with Walker. He lives with his family in Lapeer, Michigan. ROXIE MUNRO is an award-winning illustrator whose work has appeared on the cover of the New Yorker. She has born in Texas and has illustrated several books with a Texas/country theme. She now lives in New York City. www.roxiemunro.com
Loading...
or
Not Currently Available for Direct Purchase