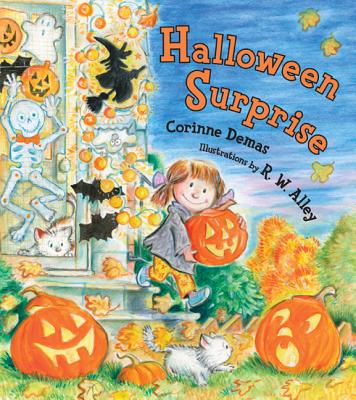 Halloween is almost here and Lily wants to make her own costume for trick-or-treating. Should she be a scary ghost? Or maybe a roly-poly pumpkin? Perhaps a glittery princess After many ideas and a few wrong turns, Lily finally settles on a costume that will be perfect for a Halloween surprise with her cuddly kittens.

The new book from the duo behind "Valentine Surprise" is sure to capture readers' hearts once again with its sweet celebration of creativity, as Lily enjoys the fun of homemade costumes and Halloween traditions.

CORINNE DEMAS is the author of many popular books for adults and children, including Valentine Surprise and Saying Goodbye to Lulu, which received a starred review in Publishers Weekly and won the ASPCA Henry Bergh award. She is a professor of English at Mount Holyoke College.www.corinnedemas.comR. W. ALLEY has illustrated nearly a hundred books for children, including Valentine Surprise, Tiger Can't Sleep, Cat Skiddoo, and the beloved Paddington series.
or
Not Currently Available for Direct Purchase
Copyright © 2020 American Booksellers Association