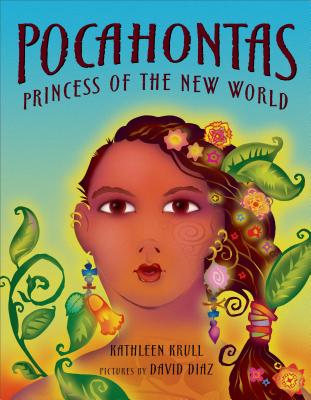 She was the favored daughter of the Chief of the Powhatan Indians, and a girl in motion; always laughing, teasing, and dancing. But from the moment John Smith and the colonists of Jamestown set foot into her world in 1607, her life would change forever. She soon became an ambassador and peace keeper between the Powhatan and the colonists. Because of her curiosity and courage, Pocahontas became the bridge between the two worlds.

Kathleen Krull is a prominent biographer for young people. Her Wilma Unlimited was named an ALA Notable Book; her Lives of the Musicians was a Boston Globe/Horn Book Honor Award winner; and her other nonfiction has won countless other awards. Kathleen also wrote A Woman for President: The Story of Victoria Woodhull for Walker & Company. She and her husband, illustrator Paul Brewer, live in San Diego, California.

DAVID DIAZ has illustrated more than thirty books, including Smoky Night, for which he was awarded the Caldecott Medal, and Margaret Wise Brown’s The Little Scarecrow Boy, which was named a New York Times Best Illustrated Book. He lives in Southern California.
Loading...
or
Not Currently Available for Direct Purchase