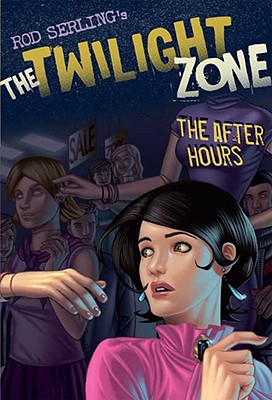 One of most ground-breaking shows in the history of television, "The Twilight Zone "has become a permanent fixture in pop culture. This new graphic novel series re-imagines the show's most enduring episodes, in all their original uncut glory, originally written by Rod Serling himself, and now adapted for a new generation a generation that has ridden Disney's Twilight Zone Tower of TerrorTM ride, studied old episodes in school, watched the annual marathons, and paid homage to the show through the many random take-offs that show up in movies and TV shows everywhere.

Submitted for your approval: Marsha White, a dissatisfied shopper with an unusual problem. This is one shopping trip that is marked final sale, return only to the customer service desk in the Twilight Zone

ROD SERLING (creator) has won the most Emmy awards for dramatic writing in the history of television. He wrote over seventyfive episodes of the Twilight Zone series. for which he won three of his Emmys. He was also the show's creator, host, and narrator. MARK KNEECE (adapter) has written stories for numerous comics, including Batman: Legends of the Dark. In 1993, he came to Savannah College of Art and Design and helped found the Ssequential Art and Animation Department, where he teaches comics writing. REBEKAH ISAACS (illustrator, The After Hours) is also the illustrator of The Wright Brothers, which she completed while studying at the Savannah College of Art and Design, where she received her BFA in Sequential Art. She currently lives in Dahlonega, Georgia.
Loading...
or
Not Currently Available for Direct Purchase