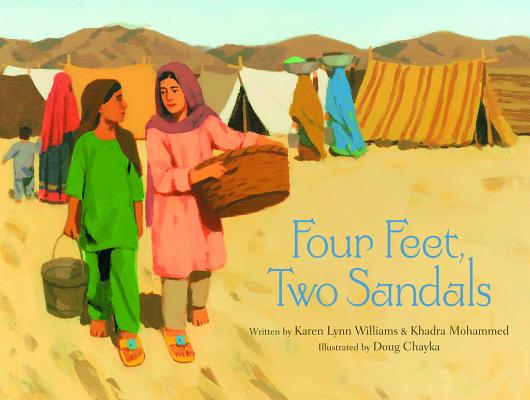 When relief workers bring used clothing to the refugee camp, everyone scrambles to grab whatever they can. Ten-year-old Lina is thrilled when she finds a sandal that fits her foot perfectly, until she sees that another girl has the matching shoe. But soon Lina and Feroza meet and decide that it is better to share the sandals than for each to wear only one. As the girls go about their routines -- washing clothes in the river, waiting in long lines for water, and watching for their names to appear on the list to go to America -- the sandals remind them that friendship is what is most important. Four Feet, Two Sandals was inspired by a refugee girl who asked the authors why there were no books about children like her. With warm colors and sensitive brush strokes, this book portrays the strength, courage, and hope of refugees around the world, whose daily existence is marked by uncertainty and fear.

Karen Lynn Williams has written several books about the difficult lives of children around the world, including Galimoto (Lothrop, Lee & Shepard), Tap-Tap (Clarion), and Circles of Hope (Eerdmans). Karen has lived in Haiti and Malawi, but now lives in Pittsburgh, Pennsylvania. Khadra Mohammed is the executive director of the Pittsburgh Refugee Center and has worked with refugees in the United States and abroad for more than twenty years. Khadra lives in Pittsburgh, Pennsylvania. Doug Chayka has illustrated several children's books, including Beekeepers by Linda Oatman High and Yanni Rubbish by Shulamith Levey Oppenheim (both Boyds Mills), and The Pink House at the Seashore by Deborah Blumenthal (Clarion). His work has also appeared in various publications, and has been honored by the Society of Illustrators. Doug teaches illustration at the Pratt Institute and lives in Brooklyn, New York. "
or
Buy Here
Copyright © 2020 American Booksellers Association