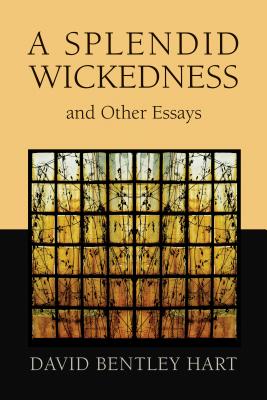 A Splendid Wickedness and Other Essays (Paperback)

Incisive essays from a master wordsmith

Why has Don Juan become so pass of late? What's the trouble with Ayn Rand? How did the Doge of Venice come to venerate the counterfeit remains of Siddhartha Gautama? Why does the Bentley family's collection of ancestral relics include a bronzed human thumb? And what, exactly, is the story behind Great Uncle Aloysius, who was born a Quaker but died a pagan?

This collection of occasional essays brings us David Bentley Hart at his finest: startlingly clear and deliciously abstruse, coolly wise and burningly witty, fresh and timeless, mystical and concrete -- often all at once. Hart's incisive blend of philosophy, moral theology, and cultural criticism, together with his flair for both the well-told story and the well-turned phrase, is sure to delight.

David Bentley Hart is an Eastern Orthodox theologian, philosopher, and cultural commentator. A regular contributor to First Things, Hart has also written The Beauty of the Infinite, In the Aftermath, and Atheist Delusions, which was awarded the 2011 Michael Ramsey Prize in Theology.
or
Buy Here
Copyright © 2020 American Booksellers Association