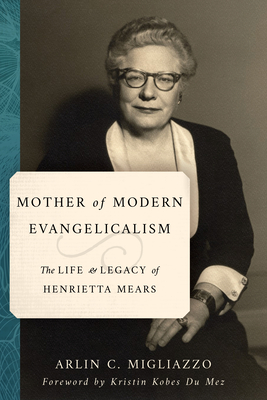 Although she was never as prominent as Billy Graham or many of the other iconic male evangelists of the twentieth century, Henrietta Mears was arguably the single most influential woman in the shaping of modern evangelicalism. Her seminal work What the Bible Is All About sold millions of copies, and key figures in the early modern evangelical movement like Bill Bright, Harold John Ockenga, and Jim Rayburn frequently cited her teachings as a formative part of their ministry. Graham himself stated that Mears was the most important female influence in his life other than his mother or wife.

Mother of Modern Evangelicalism is the first comprehensive biography of Henrietta Mears. Arlin Migliazzo uses previously overlooked archival sources and dozens of interviews with Mears associates to assemble a detailed portrait of her life and legacy, including the way she helped steer conservative theology between fundamentalism and liberal modernism with her relentless focus on the Christian life as an act of consecrated service. Readers will find here a religious leader worthy of emulation in today's world--one who sought an alternative to the divisive polemics of her own day, staying fiercely committed to the faith while fighting against the anti-intellectualism and cultural parochialism that had characterized the fundamentalist movement of the early twentieth century. While she never technically delivered a Sunday morning message from the pulpit and refused to be called a preacher, Henrietta Mears's life stands here as a sermon about graceful leadership and faithful engagement with the world.

Arlin C. Migliazzo is professor emeritus of history at Whitworth University, where he taught from 1983 to 2018. His many publications include books, articles, and essays on ethnic studies, the Pacific Northwest, colonial South Carolina, church-related higher education, the history of evangelicalism, and comparative democratic development.
Loading...
or support indie stores by buying on