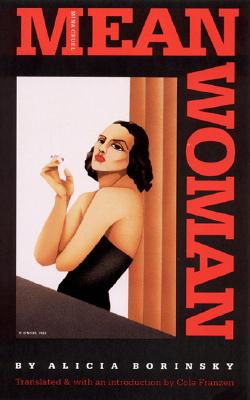 What is a woman to do? "Mean Woman "raises and answers the question time and again. The female characters in the novel rule countries, are oppressed, and rise again individually and in groups. Shifting scenes of Latin American politics are evoked in kaleidoscopic play. Swaggering heroines of tango, the Argentines Eva and Isabelita Peron, the itinerant Filipina Imelda Marcos, and their male consorts may be glimpsed in a vision whose sustained humor dazzles us with the conundrums of violence, machismo, and exile.

Alicia Borinsky grew up in Buenos Aires in the heyday of the Peronist era and belongs to the generation of Argentinean writers that includes Luisa Valenzuela and Ricardo Piglia. She is the author of seven books of poetry, fiction, and criticism, and is a professor of Latin American and comparative literature at Boston University.Cola Franzen's translations include twelve books of poetry and prose from Spanish."
or
Not Currently Available for Direct Purchase
Copyright © 2020 American Booksellers Association