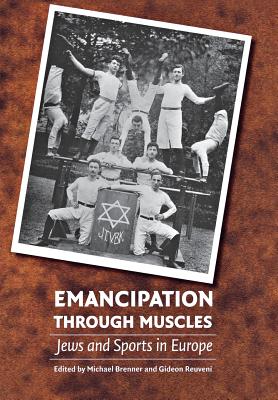 Jews and Sports in Europe

Although the study of Jewish identity has generated a growing body of work, the topic of sport has received scant attention in Jewish historiography. Emancipation through Muscles redresses this balance by analyzing the pertinence of sports to such issues as race, ethnicity, and gender in Jewish history and by examining the role of modern sport within European Jewry.

The accomplishments of Jews in the intellectual arena and their notable presence among Nobel Prize recipients have often overshadowed their achievements in sports. The pursuit of sports among Jews in Europe was never a marginal phenomenon, however. In the first third of the twentieth century numerous Jewish sport organizations were founded throughout Europe, and prowess in the realm called “muscle Jewry” by the Zionists was a symbol of widespread pride among European Jews. Some Jewish teams were remarkably successful: the legendary Austrian soccer champion Hakoah Vienna was arguably the most visible Jewish presence in interwar Vienna, and many readers will be surprised to learn that outstanding soccer teams such as Ajax Amsterdam and Tottenham Hotspur are still considered “Jewish teams.”

The contributors to this volume, an international group of scholars from a variety of fields, explore the diverse relationships between Jews and modern sports in Europe.


Praise For Emancipation through Muscles: Jews and Sports in Europe…

"Emancipation through Muscles is a significant contribution to the literature on the modern Jewish experience. Without exaggerating the import of sports for Jewish life in the 20th century, this volume goes a long way toward contributing to a much-needed corrective in the synthetic narrative of modern Jewish history."—Mitchell B. Hart, Jews & the Sporting Life