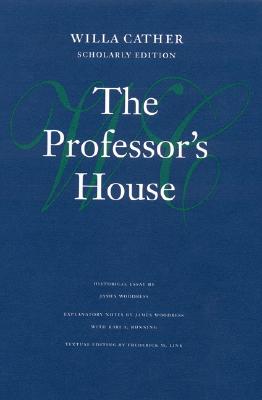 The scholarly edition of The Professor's House incorporates into its textual analysis findings from a recently discovered and significantly reworked draft of the novel. Willa Cather's perennial claims that there were no extant drafts make this discovery especially important to Cather scholars.

Written in 1925, when she was fifty-two years old, The Professor's House was Cather's seventh novel. Cather explained that in this novel she had attempted two structural experiments. The first experiment she took from the practice of early French and Spanish novelists of inserting a "nouvelle into the roman," hence the first-person "Tom Outland's Story" wedged between the other two parts of the novel. Second, she compared the novel's structure to a sonata form in music, with the center section in significant contrast to the surrounding sections

Behind the understated prose relating the story of Professor Godfrey St. Peter, who, despite his success, experiences at midcareer a profound disappointment with life, is the fierce account of how he decides to continue living despite those disappointments. Tom Outland's thrilling tale of a long-lost civilization is both an ironic contrast to the professor's staid outer life and a mirror of the imaginative interior life he experiences in his attic study.

“The Professor’s House (1925) is arguably Willa Cather’s most important novel of the 1920s. Thematically, the book is exceptionally far ranging. . . . [It] offers a portrait of conspicuous consumption occasionally reminiscent of Fitzgerald’s The Great Gatsby. . . . An achievement worthy of the masterpiece at its center, the Willa Cather Scholarly Edition of The Professor’s House is a major addition to Cather studies.”—Steven Trout, Great Plains Quarterly