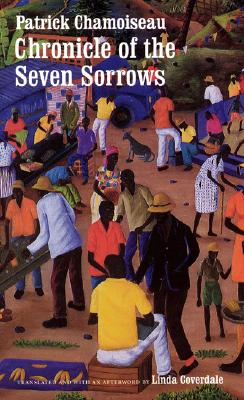 Chronicle of the Seven Sorrows (Hardcover)

Chronicle of the Seven Sorrows traces the rise and fall of Pipi Soleil, “king of the wheelbarrow” at the vegetable market of Fort-de-France, in a tale as lively and magical as the marketplace itself. In a Martinique where creatures from folklore walk the land and cultural traditions cling tenuously to life, Patrick Chamoiseau’s characters confront the crippling heritage of colonialism and the overwhelming advance of modernization with touching dignity, hilarious resourcefulness, and truly courageous joie de vivre.

Praise For Chronicle of the Seven Sorrows…

“Lovers of language, rejoice! . . . Chamoiseau’s portraits of his native Martinique [have] exploded into the English language in a fascinating mixture of classical oils and Creole colors. . . . What is glorious, as always, is Chamoiseau’s poetry.”—Jonathan Levi, Los Angeles Times
— Jonathan Levi

“He should—he must—be read. . . . Above all, Chamoiseau conjures up the stories of the Caribbean without falling into folkloric condescension or obsessive local color, refusing to be either anthropological or exotic.”—Alberto Manguel, New York Times Book Review
— Alberto Manguel

“Chamoiseau is a born storyteller, unspooling tale after remarkable tale like silken skeins, but the real star here is the language itself—so gorgeous, so delectable that you will leave the book feeling slightly drunk.”—Barbara Hoffert, Library Journal (starred review)
— Barbara Hoffert

"Published in France in 1986 and appearing in the U.S. for the first time in Coverdale’s excellent translation, Chamoiseau’s first novel, written before Texaco, is an astonishingly assured piece of work."—Publishers Weekly (starred review)
— Publishers Weekly