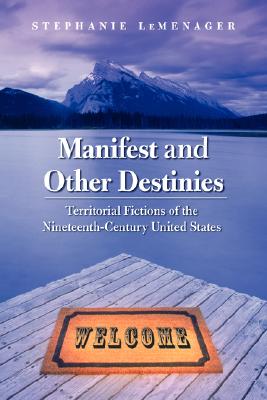 Manifest and Other Destinies

Manifest and Other Destinies critiques Manifest Destiny’s exclusive claim as an explanatory national story in order to rethink the meaning and boundaries of the West and of the United States’ national identity. Stephanie LeMenager considers the American West before it became a trusted symbol of U.S. national character or a distinct literary region in the later nineteenth century, back when the West was undeniably many wests, defined by international economic networks linking diverse territories and peoples from the Caribbean to the Pacific coast. Many nineteenth-century novelists, explorers, ideologues, and humorists imagined the United States’ destiny in what now seem unfamiliar terms, conceiving of geopolitical configurations or possible worlds at odds with the land hunger and “providential” mission most clearly associated with Manifest Destiny. Manifest and Other Destinies draws from an archive of this literature and rhetoric to offer a creative rereading of national and regional borders. LeMenager addresses both canonical and lesser-known U.S. writers who shared an interest in western environments that resisted settlement, including deserts, rivers, and oceans, and who used these challenging places to invent a postwestern cultural criticism in the nineteenth century. Le Menager highlights the doubts and self-reckonings that developed alongside expansionist fervor and predicted contemporary concerns about the loss of cultural and human values to an emerging global order. In Manifest and Other Destinies, the American West offers the United States its first encounter with worlds at once local and international, worlds that, as time has proven, could never be entirely subordinated to the nation’s imperial desire.

Praise For Manifest and Other Destinies: Territorial Fictions of the Nineteenth-Century United States (Postwestern Horizons)…

“With subtlety, incisiveness, and erudition, Stephanie LeMenager takes the subject of Manifest Destiny to a sophistication never seen before. . . . This book should be required reading for all serious students of nineteenth-century U. S. literature.”—Lawrence Buell, author Writing for an Endangered World

"This project is stunningly ambitious, meticulously researched, imaginatively interdisciplinary, and fundamentally radical in its re-reading of the nineteenth century."—José Aranda, author of When We Arrive: A New Literary history of Mexican America

"Manifest and Other Destinies provides an exciting model for denationalizing American studies. . . . LeMenager's strategy of identifying environments that as commercial contact zones once resisted national narratives of settlement brings together in a striking way materialist aspects of New Western history, ecocriticism, and efforts to globalize American literature."—Gretchen Murphy, American Literature

“In LeMenager’s Manifest and Other Destinies scholars of the American culture can trace contemporary controversy over multi-formity to the very formation of the nation.”—Western Historical Quarterly

“LeMenager reveals a new significance to the unfamiliar while revivifying and reconfiguring our understandings of the pillars of canonical American literary study.”—Western American Literature

“Stephanie LeMenager’s Manifest and Other Destinies presents a richly detailed account of the points of intersection between the regional and the transitional scales.”—Hsuan L. Hsu, Nineteenth Century Studies

Stephanie LeMenager is an assistant professor of English at the University of California, Santa Barbara.
Loading...
or support indie stores by buying on