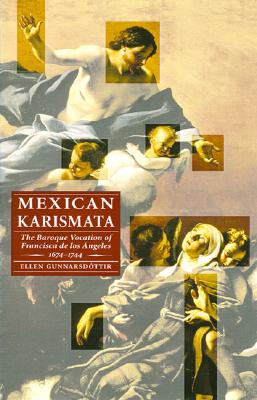 Mexican Karismata chronicles the life of Francisca de los Ángeles (1674–1744), the daughter of a poor Creole mother and mestizo father who became a renowned holy woman in her native city of Querétaro, Mexico, during the high Baroque period. As a precocious young visionary and later as the headmistress of an important religious institution for women, Francisca actively partook in the project to revitalize the Catholic cult in New Spain’s northern regions led by her mentors, the Spanish missionaries of the Congregation for the Propagation of Faith. Her copious correspondence, containing hundreds of unedited letters, documents the personal experience of popular Catholicism during the high Baroque period in New Spain.

Francisca’s journey to God did not follow prescribed hagiographical guidelines, drawing its inspiration instead from an eclectic mix of the doctrines of the Counter-Reformation, medieval spirituality, and local traditions. Her ecstatic apostolate to the dead and living often bordered on heresy but found acceptance and came to fruition under the protection of Querétaro’s ecclesiastical and secular elite. Her life shows how mystic rapture and sociability joined in this colonial variation of Early Modern Catholicism and demonstrates the remarkable vitality and openness of urban spirituality in the New World.

“This is a useful and important book. Readable and engaging, it will be essential reading for those interested in Mexican women’s history and Counter Reformation religiosity.”—Jacqueline Holler, American Historical Review
— Jacqueline Holler

Ellen Gunnarsdóttir teaches Spanish at the University of Iceland.
or
Not Currently Available for Direct Purchase