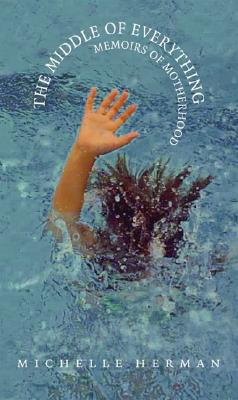 The Middle of Everything (Hardcover)

When she was three months old, Michelle Herman's daughter, Grace, went on a hunger strike. At six, she suffered what can only be described, in the old-fashioned way, as a breakdown. And at the ripe old age of eight, she began a study of the nature of "true romance." Motherhood may come naturally, but it doesn't necessarily come easily—certainly not as easily as it seemed to this mother when she vowed to do a better job than her own mother had. But the real trouble started when Herman decided that “better” wasn't good enough: she would be the perfect mother.
A memoir from the front lines of motherhood by a longtime writer of fiction, The Middle of Everything weaves a daughter's memories of her Brooklyn childhood in the 1950s and 1960s, and the shadow cast on it by her own young mother's paralyzing depression, with a middle-aged woman's account of trying to break her mother's mold by meeting her own child's every need.
A story of love of all kinds, of work and friendship (especially best-friendship, its rewards and perils both), of the charms of other people's families, of the miseries and pleasures of aging, and of the twists of the ties that bind each generation to the next, Michelle Herman's book is an energetic, exhaustive, lacerating, unflinching, and often hilarious inside look at the very nature of motherhood.

Michelle Herman teaches in the MFA program in creative writing at the Ohio State University. She is the author of Missing; a collection of novellas A New and Glorious Life; and the forthcoming novella Dog.

Praise For The Middle of Everything: Memoirs of Motherhood…

"Herman writes about the multifaceted experience of parenting with elegance and hard-earned humility. . . . Herman's writing . . . Is poignant and enlightening. 'That sometimes . . . Mothers and their children's needs will be at odds with each other in ways that aren't in the least apparent' strikes Herman, an obviously devoted, insightful and intelligent mother, as a complete surprise, for many reasons rendered clear by the end of this memoir."—Publishers Weekly
— Publishers Weekly

"A unique primer on the pitfalls of striving for parental perfection."—Booklist
— Booklist

"The Middle of Everything is a poignant, provocative, and painful book about one of life’s biggest issues—being a wonderful mother. . . . What is marvelous in the book is that somewhere amid all the recollecting of her past and examining of her daughter’s present comes a conclusion completely fresh and original. . . . It is a gift to find such candor and honesty—and even humor—on this difficult subject." —Mariflo Stephens, Virginia Quarterly Review
— Mariflo Stephens

"Honest, brave, and humbling, Michelle Herman's account of striving to become the mother her child needs—one very different from the ideal she'd imagined—is the story of every woman dedicated to sparing her child the pain of her own youth. We want to believe that love doesn't make mistakes, but Michelle Herman knows the truth: like water, love assumes the shape of the vessel, always imperfect, that holds it."—Kathryn Harrison, author of The Kiss and The Mother Knot
— Kathryn Harrison

"The Middle of Everything is honest and ugly and funny and beautiful in places where one would not even hope for bearable. Fine writing and the sure, gifted voice of the storyteller prevail, even as this family does."—Amy Bloom, author of Come to Me and A Blind Man Can See How Much I Love You
— Amy Bloom

“Herman’s lucid writing and well-crafted framework give it the richness of a first-rate novel. Her discussions of maternal issues are equally brilliant, from the difficulty in separating our needs from our children’s to the way we wrap our guilt and inadequacy in judgments of other mother’s choices.”—Donna Spencer, Ohioana Quarterly
— Donna Spencer

“An entertaining glimpse into the shared lives of a modern mother and daughter.”—Clifford Garstang, Rain Taxi Review of Books
— Clifford Garstang
or
Not Currently Available for Direct Purchase
Copyright © 2020 American Booksellers Association