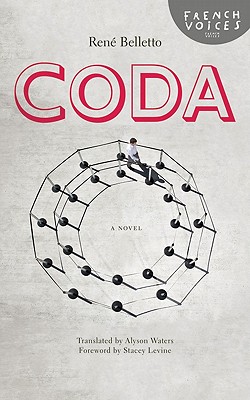 “It is to me that we owe our immortality, and this is the story that proves it beyond all doubt.” With this sentence René Belletto begins a novel that compresses every genre he has worked in—thriller, science fiction, experimental literature, horror—into one breathless narrative in which what is at stake is nothing less than our own immortality.
Playing with the expectations of the reader, Belletto constructs a logical puzzle that defies logic, much like the “almost-perpetual motion machine” invented by the narrator of this novel and his father. What sets the story in (perpetual) motion is a package of frozen seafood. This lowly mechanism triggers a series of picaresque and otherworldly events, from the storyteller’s meeting with Fate disguised as a beautiful woman, to the kidnapping of his daughter, to his amorous reunion with the younger half-sister of a high school friend, to the elimination of death from the world. It’s a funny business, but Belletto’s playful and falsely transparent language opens the book to such serious matters as explorations of death, immortality, love, and the innocence of children.

René Belletto was born in France in 1945. His first book, Le Temps mort, won the Prix Jean Ray for fantasy literature, his novel Sur le terre comme au ciel won the Grand Prix for fiction, and his novel L’Enfer won the Prix Fémina. Alyson Waters teaches translation at Yale University. She has translated multiple books, including Vassilis Alexakis’s Foreign Words and Albert Cossery’s A Splendid Conspiracy. Stacey Levine is the author of four works of fiction, including, most recently, The Girl with Brown Fur: Tales and Stories.

"[Coda] is both enjoyable simply for the story that slowly unfolds as well as for the philosophical puzzle (and solution) it turns out to be."—M.A. Orthofer, Complete Review
— M.A. Orthofer

"Coda cuts a wide berth in the reader's mind, beginning with a mysterious package of frozen clams appearing in the narrator's freezer and expanding to include perpetual motion machines, a fancy party, an alluring woman, and murder."—Paul Constant, The Stranger
— Paul Constant
or support indie stores by buying on
Copyright © 2020 American Booksellers Association