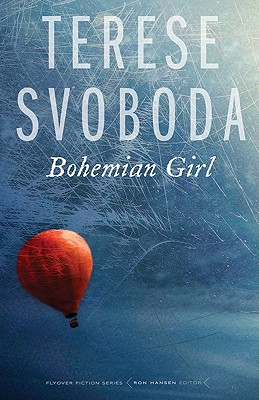 Young Harriet’s father sells her as a slave to settle his gambling debt with an eccentric Indian—and her story is just beginning. Part Huck Finn, part True Grit, Harriet’s story of her encounter with the dark and brutal history of the American West is a true original. When she escapes the strange mound-building obsession of her Pawnee captor, Harriet sets off on a trek to find her father, only to meet with ever-stranger characters and situations along the way. She befriends a Jewish prairie peddler, escapes with a chanteuse, is imprisoned in a stockade and rescued by a Civil War balloonist, and becomes an accidental shopkeeper and the surrogate mother to an abandoned child, while abetting the escape of runaway slaves.
A picaresque in the American vein, Terese Svoboda’s new novel is the Bohemian answer to Willa Cather’s iconic My Ántonia. Lifting the shadows off an entire era of American history in one brave girl’s quest to discover who she is, Bohemian Girl gives full play to Svoboda’s prodigious talents for finding the dark and the strange in the sunny American story—and the beauty and the hope in its darkest moments.

"Billed as "part Huck Finn, part True Grit," with Willa Cather mentioned as well, this in fact is sure to have a narrative voice all its own, and one worth waiting for."—Margaret Heilbrun, Library Journal
— Margaret Heilbrun

"Creating a western world as raucous and unpredictable as any imagined by Larry McMurtry, and teeming with characters as tragically heroic as those created by Willa Cather, Svoboda offers a vividly distinctive tale of the American frontier."—Carol Haggas, Booklist starred review
— Carol Haggas

"Harriet's observations of the world and her small place in it are insightful and often touching. And Svoboda (Trailer Girl and Other Stories) often displays a poet's touch with language and imagery."—Publishers Weekly
— Publishers Weekly

"We never doubt Harriet will seize as much satisfaction as this hard life can spare. . . . A marvelous heroine with an iron will and a unique voice."—Kirkus
— Kirkus

"Hollywood has handed us an American West of cowboys, cattle, train whistles, and Indian wars, but Terese Svoboda offers a different glimpse of history, from the perspective of a young girl abandoned by her own father to make her way in a world that has mostly cruelty to offer. . . . An eloquent exploration of the Wild West from the perspective of one of its victims who refuses to be victimized."—Andi Diehn, ForeWord
— Andi Diehn

"With understate prose superbly composed, Svoboda has created a world that is both complex and simple. The reader comes away with a clear understanding that what we commonly refer to as simpler times were not at all that."—Robin Martin, issuu
— Robin Martin

Terese Svoboda is the author of five volumes of poetry and four novels, including Tin God (Nebraska 2006); a collection of short stories, Trailer Girl and Other Stories (available in a Bison Books edition); and a nonfiction book, Black Glasses like Clark Kent: A GI’s Secret from Postwar Japan, winner of the Graywolf Nonfiction Prize.
Loading...
or support indie stores by buying on