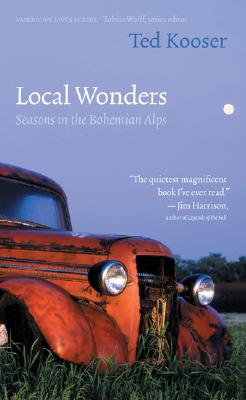 Ted Kooser describes with exquisite detail and humor the place he calls home in the rolling hills of southeastern Nebraska—an area known as the Bohemian Alps. Nothing is too big or too small for his attention. Memories of his grandmother’s cooking are juxtaposed with reflections about the old-fashioned outhouse on his property. When casting his eye on social progress, Kooser reminds us that the closing of local schools, thoughtless county weed control, and irresponsible housing development destroy more than just the view.

In the end, what makes life meaningful for Kooser are the ways in which his neighbors care for one another and how an afternoon walking with an old dog, or baking a pie, or decorating the house for Christmas can summon memories of his Iowa childhood. This writer is a seer in the truest sense of the word, discovering the extraordinary within the ordinary, the deep beneath the shallow, the abiding wisdom in the pithy Bohemian proverbs that are woven into his essays.

"Eloquent meditations on country pleasures, the rhythms of the seasons and the lingering presence of Czech folk culture in rural Nebraska."—Dan Cryer, Newsday
— Dan Cryer

Ted Kooser is a visiting professor of English at the University of Nebraska and a retired insurance executive. His poetry has appeared in nine special collections and eight books, including Winter Morning Walks: 100 Postcards to Jim Harrison and Weather Central.
Loading...
or
Not Currently Available for Direct Purchase