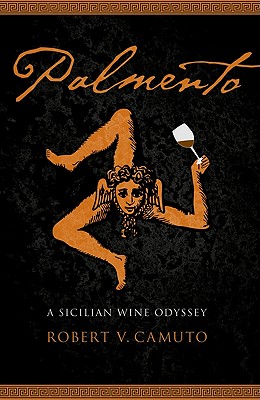 A Sicilian Wine Odyssey (At Table )

Inspired by a deep passion for wine, an Italian heritage, and a desire for a land somewhat wilder than his home in southern France, Robert V. Camuto set out to explore Sicily’s emerging wine scene. What he discovered during more than a year of traveling the region, however, was far more than a fascinating wine frontier.
Chronicling his journey through Palermo to Marsala, and across the rugged interior of Sicily to the heights of Mount Etna, Camuto captures the personalities and flavors and the traditions and natural riches that have made Italy’s largest and oldest wine region the world traveler’s newest discovery. In the island’s vastly different wines he finds an expression of humanity and nature—and the space where the two merge into something more.  Here, amid the wild landscapes, lavish markets, dramatic religious rituals, deliciously contrasting flavors, and astonishing natural warmth of its people, Camuto portrays Sicily at a shining moment in history. He takes readers into the anti-Mafia movement growing in the former mob vineyards around infamous Corleone; tells the stories of some of the island’s most prominent landowning families; and introduces us to film and music celebrities and other foreigners drawn to Sicily’s vineyards. His book takes wine as a powerful metaphor for the independent identity of this mythic land, which has thrown off its legacies of violence, corruption, and poverty to emerge, finally free, with its great soul intact. Watch the Palmento book trailer on YouTube.

Praise For Palmento: A Sicilian Wine Odyssey (At Table )…

"By coexisting with his subject through four contiguous seasons, Camuto captures an intimate family album that eloquently details the idiosyncrasies, charisma and drive of Sicilian winemakers today."—Kirkus Reviews

"From the craggy vineyards of Mount Etna to the tiny moscato-producing island of Pantelleria, and from every angle of its wine hierarchy, Mr. Camuto extracts fascinating and illuminating details about Sicily, bringing to life the characters, conflicts and family dynamics that define a culture and its wines. It’s a beautiful, enthralling work, eternally wistful and hopeful, much like Sicily itself."—Eric Asimov, New York Times

"You'd better be ready to open a good bottle of wine and prepare some appetizers before you start reading—the author's tantalizing writing will drive you to snacking."—Tracey, Powell's Books

"[Robert Camuto's] affection for Sicily and its citizens is heartfelt, and his skill and enthusiasm combine to create a captivating portrait of a singular culture."—Thomas Matthews, Wine Spectator

"Camuto does a good job of evoking the beauty and mystery of the island, and captures some dozen winemakers in profiles that range from the very brief to the very detailed. . . . Through his eyes, I enjoyed meeting Giusto Occhipinti of COS, Diego Planeta, Frank Cornelissen, Marco de Bartoli and others."—S. Irene Virbila, Los Angeles Times

Robert V. Camuto is an award-winning journalist and travel writer. He is a contributor to Wine Spectator and the Washington Post and the author of Corkscrewed: Adventures in the New French Wine Country, available in a Bison Books edition.
Loading...
or
Not Currently Available for Direct Purchase