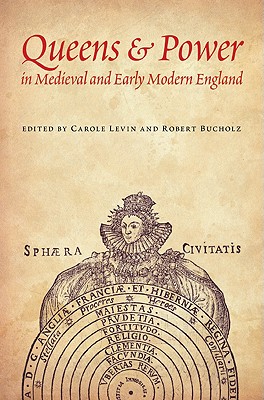 Queens and Power in Medieval and Early Modern England

In Queens and Power in Medieval and Early Modern England, Carole Levin and Robert Bucholz provide a forum for the underexamined, anomalous reigns of queens in history. These regimes, primarily regarded as interruptions to the “normal” male monarchy, have been examined largely as isolated cases. This interdisciplinary study of queens throughout history examines their connections to one another, their constituents’ perceptions of them, and the fallacies of their historical reputations. The contributors consider historical queens as well as fictional, mythic, and biblical queens and how they were represented in medieval and early modern England. They also give modern readers a glimpse into the early modern worldview, particularly regarding order, hierarchy, rulership, property, biology, and the relationship between the sexes. Considering topics as diverse as how Queen Elizabeth’s unmarried status affected the perception of her as a just and merciful queen to a reevaluation of “good Queen Anne” as more than just an obese, conventional monarch, this volume encourages readers to reexamine previously held assumptions about the role of female monarchs in early modern history.

Praise For Queens and Power in Medieval and Early Modern England…

“There’s a little bit for everyone here, especially for those interested in Elizabeth I, whose acts of mercy, travels, international relations, and representations in various guises are all covered, among other topics. . . . Those interested in any of the queens here will find this a rewarding book.”—Susan Higginbotham, Historical Novels Review

"These excellent essays are a joy to read. Together they question assumptions about pre-modern culture and offer new and interesting interpretations of queenship."—Retha Warnicke, Sixteenth Century Journal

Carole Levin is Willa Cather Professor of History at the University of Nebraska–Lincoln. She is the author of Dreaming the English Renaissance: Politics and Desire in Court and Culture and The Heart and Stomach of a King: Elizabeth I and the Politics of Sex and Power. Robert Bucholz is a professor of history at Loyola University. He is the author of several books, including The Augustan Court: Queen Anne and the Decline of Court Culture, and the coauthor (with N. E. Key) of Early Modern England, 1485–1714: A Narrative History.  Contributors: Charles Beem, Robert Bucholz, Sarah Duncan, Timothy G. Elston, Elaine Kruse, Amber Harris Leichner, Carole Levin, Michele Osherow, Anna Riehl, Linda S. Shenk, Marjorie Swann, John Watkins, Michelle A. White, and Richardine Woodall.
Loading...
or support indie stores by buying on