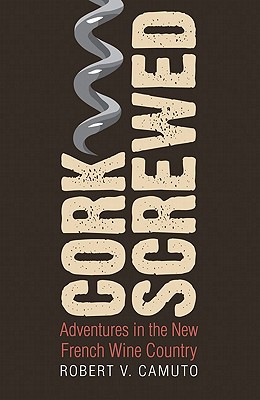 Adventures in the New French Wine Country (At Table )

Robert V. Camuto’s interest in wine turned into a passion when he moved to France and began digging into local soils and cellars. Corkscrewed recounts Camuto’s journey through France’s myriad regions—and how the journey profoundly changed everything he believed about wine. The world of great wines was once dominated by great Bordeaux châteaux. As those châteaux were bought up by moguls and international corporations, the heart of French winemaking shifted to the realm of small producers, whose wines reflect the stunning diversity of regional environment, soil, and culture—terroir. In this book we follow Camuto across France as he works harvesting grapes in Alsace, learns about wine and bombs in Corsica, and eats and drinks his way through the world’s greatest bacchanalia in Burgundy. Along the route he discovers a new generation of winemakers who have rejected chemicals, additives, and technologically altered wines. His book charts an odyssey into this new world of French wine, a world of biodynamic winegrowing, herbal treatments, lunar cycles, and grape varieties long ago dismissed as “difficult.” Camuto’s work is a delightful look beyond the supermarket into the kaleidoscopic world of flavors offered by the true vintners of France.

Robert V. Camuto has been a journalist for nearly thirty years. He is a contributor to Wine Spectator and the Washington Post, and his articles have appeared in many other magazines and newspapers. He and his family live in France.
Loading...
or support indie stores by buying on