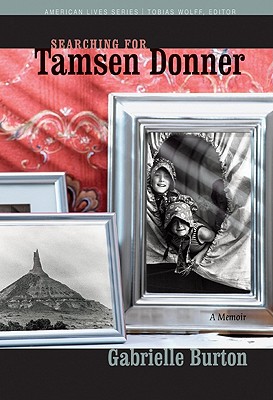 Tamsen Donner. For most the name conjures the ill-fated Donner party trapped in the snows of the Sierra Nevada Mountains in 1846–47. Others might know Tamsen as the stoic pioneer woman who saw her children to safety but stayed with her dying husband at the cost of her own life. For Gabrielle Burton, Tamsen’s story, fascinating in its own right, had long seemed something more: the story of a woman’s life writ large, one whose impossible balancing of self, motherhood, and marriage spoke to Burton’s own experience.
This book tells of Burton’s search to solve the mystery of Tamsen Donner for herself. A graceful mingling of history and memoir, Searching for Tamsen Donner follows Burton and her husband, with their five daughters, on her journey along Tamsen’s path. From Tamsen’s birthplace in Massachusetts to North Carolina, where she lost her first family in the space of three months; to Illinois, where she married George Donner; and finally to the fateful Oregon Trail, Burton recovers one woman’s compelling history through a modern-day family’s adventures into realms of ultimately timeless experiences. Here Burton has also, for the first time, collected and published together all seventeen of Tamsen’s known letters.

“As dramatic and tragic as the story of the Donner Party is, it shares space here with the tender reflections of a mother of five daughters—daughters whose filial companionship on a summer road trip long ago bespoke a very different kind of family journey across the American West.”—William Deverell, Los Angeles Times Book Review

"[Searching for Tamsen Donner] is a thoughtful and engaging blend of history and memoir that inspires the reader to delve further into the Donner party's fate, while at the same time enjoying Burton's struggle to be both a full-time mother and successful writer."—Deborah Donovan, Booklist Online

"[Burton] succeeds where other historians and biographers have failed in uncovering and publishing here all 17 of Donner's known letters from the journey. . . . Burton's curiosity to speculate and piece together clues as to circumstances surrounding Tamsen's fate . . . drives the narrative forward as if Burton's own perceived vulnerabilities somehow implicate her in the tragedy. It's the book's final uncoupling of these two parallel lives that is Tamsen Donner's legacy to pioneering women and Burton's literary triumph."—R. D. Pohl, Buffalo News

“A moving exploration of a legendary American woman through the eyes of a modern heroine.”—Barbara Smith, Feminist Review

"This is, of course, as much Gabrielle Burton's story as it is that of Tamsen Donner, and as such captures the reader early with its sincerity and idealism, and, indeed, its obsession."—Charles Stephen, Lincoln Journal Star