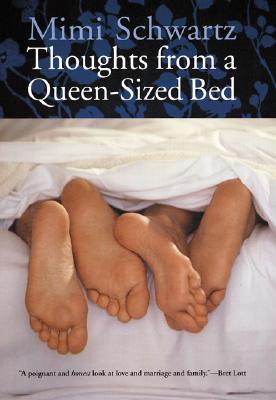 In this startlingly funny and wonderfully honest book of essays, Mimi Schwartz describes what it means to be married for almost forty years. She writes with a keen and amused eye about growing up in an immigrant Jewish family, coming of age in New York in the 1950s, marrying her high school beau, and then arriving at feminist consciousness in the 1970s like so many others of her generation. But unlike many of her contemporaries who left first marriages for independence, Schwartz stayed loyal to her marriage.

With refreshing candor Schwartz describes the ongoing challenge of marriage, where success is never without ambivalence and humor. Her essays are wise and warm without being sentimental, and the characters in Schwartz's world are quirky and as charming, well rounded, and complex as those found in any novel.


Praise For Thoughts from a Queen-Sized Bed (American Lives )…

"A queen-size bed may sound roomy, but when it is shared by a couple married for 40 years, the fit can be tight. Such a bed becomes a place where thoughts—on love, negotiating a long partnership, motherhood, staying faithful—and memories flow powerfully. . . . Subjects range from Ms. Schwartz's cooking for her husband. . . . before she leaves for a conference, to dealing with a mastectomy. This being New Jersey, there are stories about driving, most notably one describing a long drive to Cape Cod, replete with arguments over who forgot the map, and other tension. As couples surely know, a car is roughly the same size as a queen-sized bed."—The New York Times

"A gentle, moving celebration of the quotidian."—Kirkus Reviews

"[A] light and sure touch." —Booklist

"Schwartz has written a gem of a book about her own marriage, it's legacies and expectations, which have evolved since she said 'I Do' in 1961: 'I never expected "I love you, I hate you" to get all mixed up,' she writes in one of 36 first-person essays that are humorous, heart-rending, candid, observant, touch us deeply, and sometimes skewer the obsessions of our time. Schwartz knows how to turn a phrase."—Joan Crespi, Jewish Book World

Mimi Schwartz is a professor emerita of writing at Richard Stockton College. She is the author of Good Neighbors, Bad Times: Echoes of My Father's German Village and Writing True, the Art and Craft of Creative Nonfiction (co-authored with Sondra Perl).