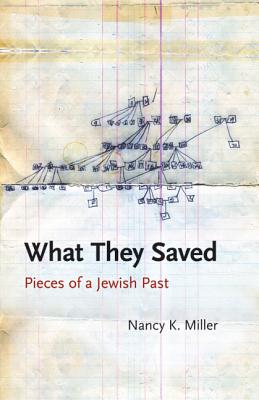 Pieces of a Jewish Past

Winner of the 2012 Jewish Journal Book Prize
After her father’s death, Nancy K. Miller discovered a minuscule family archive: a handful of photographs, an unexplained land deed, a postcard from Argentina, unidentified locks of hair. These items had been passed down again and again, but what did they mean? Miller follows their traces from one distant relative to another, across the country, and across an ocean. Her story, unlike the many family memoirs focused on the Holocaust, takes us back earlier in history to the world of pogroms and mass emigrations at the turn of the twentieth century.
Searching for roots as a middle-aged orphan and an assimilated Jewish New Yorker, Miller finds herself asking unexpected questions: Why do I know so little about my family? How can I understand myself when I don’t know my past? The answers lead her to a carpenter in the Ukraine, a stationery peddler on the Lower East Side, and a gangster hanger-on in the Bronx. As a third-generation descendant of Eastern European Jews, Miller learns that the hidden lives of her ancestors reveal as much about the present as they do about the past. In the end, an odyssey to uncover the origins of her lost family becomes a memoir of renewal.

Nancy K. Miller is distinguished professor of English and comparative literature at the Graduate Center of the City University of New York. She is the author or editor of more than a dozen books, most recently Breathless: An American Girl in Paris, But Enough About Me: Why We Read Other People’s Lives, and Bequest and Betrayal: Memoirs of a Parent’s Death.
Loading...
or support indie stores by buying on