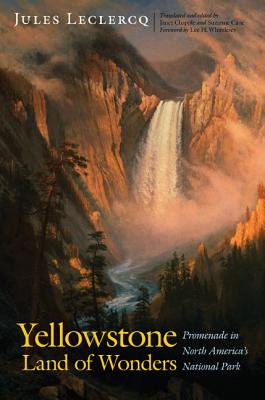 In the summer of 1883 Belgian travel writer Jules Leclercq spent ten days on horseback in Yellowstone, the world’s first national park, exploring myriad natural wonders: astonishing geysers, majestic waterfalls, the vast lake, and the breathtaking canyon. He also recorded the considerable human activity, including the rampant vandalism. Leclercq’s account of his travels is itself a small marvel blending natural history, firsthand impressions, scientific lore, and anecdote. Along with his observations on the park’s long-rumored fountains of boiling water and mountains of glass, Leclercq describes camping near geysers, washing clothes in a bubbling hot spring, and meeting such diverse characters as local guides and tourists from the United States and Europe. Notables including former president Ulysses S. Grant and then-president Chester A. Arthur were also in the park that summer to inaugurate the newly completed leg of the Northern Pacific Railroad.

A sensation in Europe, the book was never published in English. This deft translation at long last makes available to English-speaking readers a masterpiece of western American travel writing that is a fascinating historical document in its own right.

“What a delightful discovery this book is. Jules Leclercq is the kind of writer we love to travel with—enthusiastic, energetic, observant, curious, and companionable. Janet Chapple and Suzanne Cane have produced a splendid translation and well-researched edition.”—Robert Root, author of Postscripts: Retrospections on Time and Place

“This lost jewel by an overlooked but wonderful explorer reads like a Jules Verne novel and is astonishing in its poetic descriptions of the raw nature of Yellowstone in the nineteenth century. A beautiful, evocative work on those early days in the American wilderness, it is like a literary Ansel Adams.” —Peter Schulman, translator, author, and professor at Old Dominion University

"Any nature scholar interested in provenance or the origins of the naming of landscapes will find in Janet Chapple and Suzanne Cane's translation a welcome addition to the genre."—Foreword Reviews

"This deft translation at long last makes available to English-speaking readers a masterpiece of western American travel writing that is a fascinating historical document in its own right."—Christopher Lewis, Dad of Divas

"Meticulously edited, with very good notes, this well-made book is both scholarly and easy to read."—Lois D. Atwood, Providence Journal

Jules Leclercq (1848–1928), who wrote twenty-three travelogues, was a judge by profession and a founding member of the Royal Belgian Geographical Society. Janet Chapple is the author of Yellowstone Treasures: The Traveler’s Companion to the National Park. Suzanne Cane is a librarian and independent French translator.
Loading...
or support indie stores by buying on