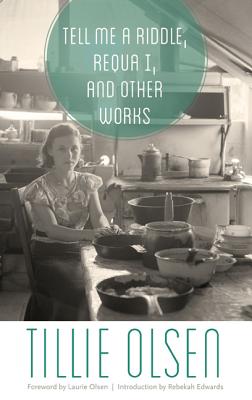 Tell Me a Riddle, Requa I, and Other Works

A century after her birth, Tillie Olsen’s writing is as relevant as when it first appeared; indeed, the clarity and passion of her vision and style have, if anything, become even more striking over time. Collected here for the first time are several of Olsen’s nonfiction pieces about the 1930s, early journalism pieces, and short fiction, including the four beautifully crafted, highly celebrated stories originally published as Tell Me a Riddle: “I Stand Here Ironing,” “Hey Sailor, What Ship?,” “O Yes,” and “Tell Me a Riddle.” Also included, for the first time since it appeared in the 1971 Best American Short Stories, is “Requa I.”

In these stories, as in all of her work, Olsen set a new standard for the treatment of women and the poor and for the depiction of their lives and circumstances. In her hands, the hard truths about motherhood and marriage, domestic life, labor, and political conviction found expression in language of such poetic intensity and depth that their influence continues to be felt today.

An introduction by Olsen’s granddaughter, the poet Rebekah Edwards, and a foreword by her daughter Laurie Olsen provide a personal and generational context for the author’s work.


Praise For Tell Me a Riddle, Requa I, and Other Works…

“[The Tell Me a Riddle collection] exists in the realm in which craftsmanship is transformed into mystery, and criticism comes close to irrelevance.”—Granville Hicks, Saturday Review of Literature

“They are alive, her people. . . . [Olsen] creates them with a feeling and understanding so deep as to be literally painful.”—New York Times Book Review

“Out of poverty and hardship . . . [Olsen] reveals with compression, depth, and a passionate economy of language a working-class America that few writers have known or realized existed.”—London Tribune

"Even a century later, Olsen's writing is brilliantly measured and rich in character—a blend that few writers achieve. Coupled with essays by her daughters and granddaughter, Olsen's newest collection is a must-have for any reader."—Portland Book Review

"An excellent volume that will appeal to anyone interested in women's studies, social justice, journalism, and American short stories and fiction."—Erica Swenson, Library Journal

Tillie Olsen (1912–2007) was an activist, feminist, award-winning author, and teacher who won nine honorary degrees and whose short stories “Tell Me a Riddle” (winner of the O. Henry Award) and “I Stand Here Ironing” have been anthologized extensively. She is the author of the novel Yonondio: From the Thirties, available in a Bison Books edition, the nonfiction book Silences, and numerous published essays and is the editor of Mother to Daughter, Daughter to Mother: Mothers on Mothering.